The curious nature of the Equator

The curious nature of the Equator 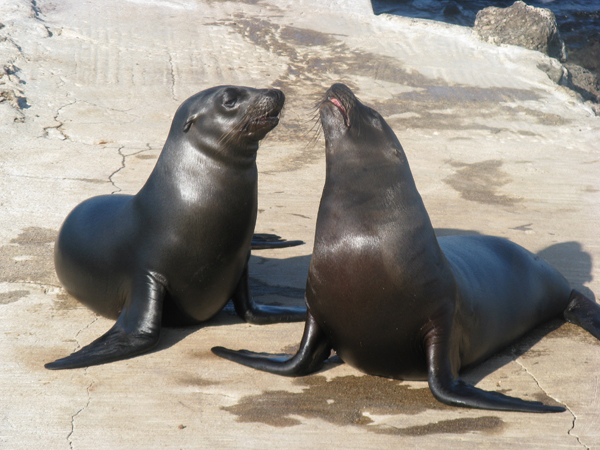 The world’s only tropical sea lions are found on several Galapagos islands. Shifting ocean currents warm and cool the water to provide seasons at the Equator. Photos by Harold Piper


Let’s do two wonders-of-nature vacations in one - combine the upper Amazon Basin and the famed Galapagos Islands. 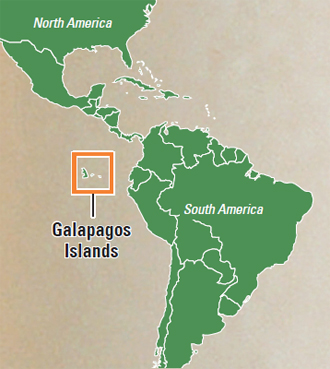 First, there is the question of when to plan your visit. Both regions are close to the Equator, but unlike most equatorial climes, both Amazonia and the Galapagos have distinct seasons.

In the wet season, snowmelt from the Andes raises the water level in the upper Amazon Basin by more than 30 feet (9.1 meters). Forests are flooded, trails disappear and the only way to get around is by boat. In dry season, roughly from May to October, the water subsides, land reappears and exploration on foot is possible.

In the Galapagos, a Pacific archipelago 966 kilometers off the South American coast, two ocean currents vie for weather domination. For about half the year a current from Panama bathes the islands in warm water. Then the Humboldt current from Antarctica takes over, pushing the warm water northward and providing a penguin-friendly cooling trend.

The famed Galapagos tortoises are landlubbers, present all year long, wet or dry, warm or cool. You will see them whenever you go.

So we chose the best snorkeling season, late February when the water is warmest. That meant that we would miss some migratory wildlife, notably albatrosses. On the other hand it put us there just at breeding season for frigate birds and boobies.

It also coincided with wet season in Amazonia - another good decision, as it turned out. For three and a half days we explored upper channels of the river system, and spotted 50 species of birds.

Technically, this water was not the Amazon River, but its upper basin. The name Amazon begins to be used near Iquitos, in northeastern Peru, at the confluence of two other rivers, themselves each more than 1,600 kilometers long. We boarded our river boat, the Delfin, and cruised down the Maranon, turned the corner where the Amazon begins, and then rode upstream on the Ucayali.

Each morning and afternoon, our small group of eight - just four spacious guestrooms on the Delfin - set out in a motor skiff, searching the flooded forests for sloths, iguanas, caimans (a sort of small crocodile) several varieties of monkey (squirrel monkeys, howlers, dusky titis and noisy night monkeys), bats, an anteater and river dolphins. Flower fragrances, mostly from aquatic mimosas, enveloped us.

One afternoon we kayaked through river meadows of floating vegetation. This was “black water,” colored by the tannins of decomposing vegetation. The main river is a muddy brown, from the volcanic silts being washed downstream.

Most of the time we were alone on the water - no tourists, no commerce. We listened in silence to the screeches, honks, squawks, chirps and tweets of the birdlife. We fished for piranha in the tributary Arape River, but the fish weren’t hungry that morning.

We saw a pink-toed tarantula with - sure enough - pink tips on its eight dark legs. “Who does her pedicures?” someone wondered. And we saw a tiny green polka-dot frog smaller than a fingertip.

In the Picaya Samiria Nature Reserve, an area of forest and water the size of Belgium, we visited villages with houses on stilts. About 40,000 people, mostly native Indians, live in this part of Amazonia. The government sends teachers to each village, and also attempts to enlist the people in conservation projects - by collecting turtle eggs, for example, and selling them to the national park instead of to poachers.

Our guide, Rody Flores, had been the son of one of these government teachers when he was young. He spent six years in the jungle and learned all the sights, sounds and habits of its denizens. He knew the plants and their medicinal uses - for headache, fever, constipation, scabies, hangover, hemorrhoids, plants to fight parasites and to terminate pregnancies.

One evening he snatched a two-foot caiman from the water. Finding it was elementary: When he spotted a patch of water lettuce, his experience told him that he would find snails feeding on the vegetation and caiman going after the snails.

It was time to leave Amazonia. As the airplane lifted off, the jungle below appeared as a green plush carpet cut by curvaceous gray channels of Amazonian water. We had expected the Galapagos to be the highlight of the trip. Now we agreed that the islands were going to have to be pretty marvelous to match, let alone excel, the river adventure.

The Galapagos lived up to the challenge, but first we faced the matter of getting there.

South America’s capital cities are linked by air, but not many of the secondary cities, except to their own national capitals. Iquitos, in the heart of the Peruvian Amazon, is not far from the Ecuadorian capital of Quito - in fact it was part of Ecuador before the two countries fought a border war in 1941. Now, however, we had to fly south to Lima and then North to Quito.

By the way, do what we did and spend a couple of days in Quito. It is a lovely city nestled high at (2,831 meters) in an Andes valley. The Old City is a Unesco World Heritage site. The San Francisco and particularly the Compania (Jesuit) churches are among the artistically richest - and least celebrated - in North America.

On a bright afternoon, we have reached the Galapagos. First stop, the famous tortoises. There they were, roaming (slowly) around a nature park on Santa Cruz Island. As advertised, they are big (1.5 meters long), heavy (227 kilograms) and old.

It is estimated that they may live up to 200 years. A tortoise that Charles Darwin took home to England from his famous voyage of 1835 died only a few years ago. Perhaps even now there are a few old-timers among the tortoise population who were hatchlings when Darwin visited.

Tortoises were central to Darwin’s ideas about evolution. It is hypothesized that the first tortoise to reach the Galapagos made the 1000-kilometer journey on driftwood. Perhaps it was a pregnant female. At any rate, the reptiles spread through the 13 islands, and over the course of millennia adapted to local conditions.

Once there were 15 species, of which 11 survive, although in one case, Chelonoidis nigra abingdoni, the species is represented by a single individual. You can see him, nicknamed Lonesome George, in the Charles Darwin Research Station on Santa Cruz Island. As he is only about 70 to 90 years old, there is still hope for species continuation, provided a Lonesome Georgina turns up one of these years.

Darwin reported that, “The inhabitants .?.?. state that they can distinguish the tortoises from the different islands; and that they differ not only in size, but in other characters.”

How did this happen? Darwin spent years puzzling it out, and reported his answers in his monumental “On the Origin of Species,” published in 1859.

In the case of iguanas, some found their leafy food on land and others learned to hold their breath and forage in the sea for algae.

The Galapagos Islands served as a natural laboratory for Darwin and subsequent researchers because for most of recorded time plant and animal life were not subjected to the disruptions of human habitation - nor even of major predators.

That is why the wildlife is so tame. Darwin recorded that he captured birds simply by netting them in his hat. Still today, birds perch on nearby branches long enough for any amateur to fumble for his camera, turn it right-side-up, drop it, pick it up again, focus and snap a prize-winning shot.

Birds flew to Galapagos, sea lions swam, tortoises and some lizards and insects may have floated on driftwood. But how would a jaguar or a rat make the journey? So the animals are not worried about being eaten or having their eggs stolen. We probably could have petted the sea lions. We did practically trip over iguanas.

And, as in the Amazon, our base was a yacht. By night we plied from island to island, and by day we took excursions to one island after another.

Though all are in proximity, all are different. On the volcanic James (Santiago) Island, practically the entire ecology consists of four species: tequilia flowers; small, dull-gray iguanas called lava lizards that eat the flowers; snakes that eat the lizards; and hawks that eat both. Santa Cruz Island has 500 animal species.

One more thing about Galapagos at this time of year - late February-early March. If you are a bit prudish, as I am, it is rather shockingly sexy. And of course, this being the Galapagos, you are quite close to the action.

We saw tortoises mating, iguanas mating. “Rough sex” is iguana sex. Depending on the species, a male turns red and green or bright orange to attract females. Then he bites her on the neck to grab her and hold her in place.

We saw frigate birds standing on the corner watching all the girls fly by. Male frigates, black creatures with extraordinary, jointed 2.4-meter (8-foot) wingspans that resemble B-2 bombers, have brilliant, red neck pouches that they distend in hopes of impressing the ladies. Poor fella, standing there puffing out his neck hour after hour while the females fly indifferently past. Reminds me of myself as a college freshman.

We saw every phase of Nazca booby reproduction, all concentrated in one afternoon on one island, Tower. Some pairs were in courtship, some actively mating, some guarding a nest with one or two eggs, some tending nests with single chicks.

Two eggs, but then single chicks? Sad to report, the elder hatchling will expel its younger sibling from the nest. Why such a waste of energy to brood and hatch two chicks if one will be wasted? A theory is that the act of murdering your sibling releases a burst of testosterone that the survivor (male or female) will need to get along in the world.

Well, it is a Darwinian world, isn’t it?

But it’s a fascinating world. And I haven’t even mentioned the geology of these volcanic islands. Our guide, Luis Rodriquez, was like a professor with three Ph.D.s, in botany, zoology and geology. From Luis, we learned about aa lava (fractured) and hapoipoi lava (ropy). We learned why some beach sands are red (iron) or black (volcanic) or green (olivine crystals) or gold (I forget) or white (fish poop).

An explanation is in order. Certain fish, significantly the parrot fish, chew up shells to digest the algae and excrete the ground shell material, which then becomes beach sand. Snorkeling, we actually saw the foraging and the excretion. Also, right there in the water with you: rays, sharks, penguins, sea lions, lobsters and colorful reef fish.

Ready to go? For the Amazon, go Latin Excursions. For the Galapagos, go INCA Floats. But go.