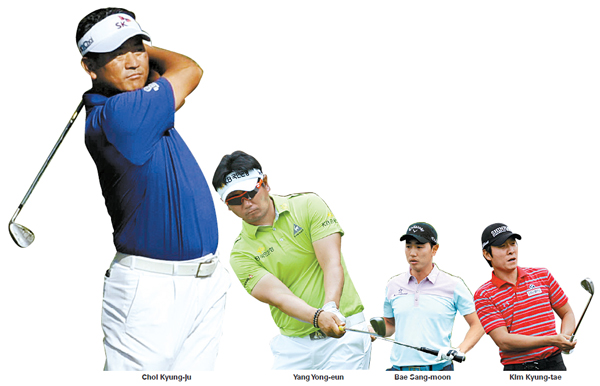 Choi Kyung-ju and Yang Yong-eun are ready to lead the Korean male golfers as they aim for the coveted green jacket at the 76th Masters, which tees off today.

Kim Kyung-tae and Bae Sang-moon will join them at the Augusta National Golf Club in Georgia. They are among 97 golfers, which is the fifth-largest field in Masters history, to compete in this year’s first major golf tournament. 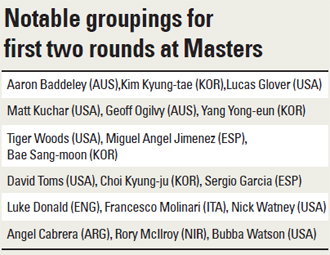 The Koreans will play against 14-time major winner Tiger Woods, who ended his 30-month drought two weeks ago by winning the Arnold Palmer Invitational, and other top-ranked European golfers such as World No. 1 Luke Donald, No. 2 Rory McIlroy, a Northern Ireland prodigy who took the U.S. Open last year, and No. 3 Lee Westwood.

Among Koreans, Choi and Yang are expected to place their names on top of the leader board, taking advantage of their experience. It is the second appearance for Kim at the Augusta National, while PGA rookie Bae, who has drawn the same group as Woods for the first two rounds, makes his debut.

Choi, better known as K.J. Choi on the PGA Tour, is making his 10th appearance at the Masters since making his debut in 2003, when he tied for 15th.

The 42-year-old from Wando Island, South Jeolla, had the best finish among Asian golfers after taking third place in 2004. Choi also finished in the Top 10 in the last two Masters. He tied for fourth in 2010 and shared eighth place last year.

In an interview with the JoongAng Ilbo, Choi said the Augusta National is becoming familiar to him.

“It feels like I’m not a guest, but I’m on my way home,” Choi said. “The feeling is mixed with tension and comfort.”

“My new caddie Steve Underwood is good, but Andy has been with me for the past eight years and we know how to work with each other,” Choi said. “I think we will work together at least until the U.S. Open.”

For this year’s Masters, Choi said he will play more aggressively than in past tournaments. In order to get good results, the Korean said he prepared more on his short game and how to handle the green.

“For the short game, you need to consider the slope of the green, the lean of the grass, speed and many other things,” Choi said. “You need imagination more than just basic skills.”

“But whatever the outcome, I will put forth my best efforts and return home with no regrets.”

Choi, whose world ranking is 23rd, hopes his 10 years of experience will pay off this year, but outside of the field he already took advantage of his appearance in the Masters. He recently put his two VIP invitation cards up for auction in order to fund his own foundation which he established five years ago. One of his VIP cards includes the privilege of being Choi’s caddie for the Par 3 Contest.

“In the U.S, it would have sold for $2 million, but mine was at 10 million won [$8,860],” Choi said. “Regardless, that money was used for helping kids’ education, and they appreciate the support.”

Meanwhile, Yang is aiming for his second majors title. The 40-year-old became the first Asian to win the major golf tournament in 2009 when he beat Woods to claim the PGA Championship.

The golfer, whose world ranking is 55th, has only two career victories on the PGA Tour, but he has been solid in big tournaments. Yang tied for third in last year’s U.S. Open and is competing at the Masters for his fifth time.

Yang, who is better known as Y.E. Yang in the U.S., warmed up at the Shell Houston Open last weekend where he tied for 29th. The Jeju native has recently changed his putter and swing, but said he is confident.

“I changed my swing from January to change my swing plane,” Yang said. “It’s getting better and since I go well with the Augusta National, I can have some expectations here.”

The golfer also said he watched on YouTube the swings of legends Ben Hogan and Ernie Els to enhance his own. As for his putter, he changed to a 38-inch-long putter and said it’s working “not bad.”

The Masters is a tournament where efforts really pay off.

“It’s difficult to win at the Masters with luck,” Choi said. “From tee shot to putt, you need to be good at everything. You need to come up with a good strategy, stamina and your short game needs to be perfect.”