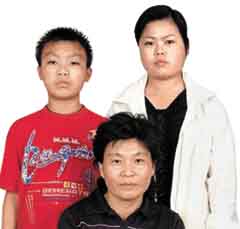 Baek Yeong-ok, center, poses with son Lee Gang-min, left, and daughter Lee Il-sim in this photo provided by Comebackhome, an association of families of South Koreans abducted by the North and South Korean prisoners of war. Provided by the association

Seven other defectors taking refuge in Korean consulates in Shanghai and Shenyang for the past two years will soon follow.

“The other North Korean defectors will be able to return to South Korea with the passing of time,” a source in Beijing said.

Those defectors are a different group from the unknown number China has arrested in several places since early February, and their plight is attracting worldwide attention. If sent back to North Korea, they could be executed or sent to political prisons.

The four who arrived Sunday include 47-year-old Baek Yeong-ok, who is the daughter of a South Korean prisoner of war, and her two children, Lee Gang-min and Lee Il-sim, the sources said.

Baek Yeong-ok’s elder sister successfully defected to the South in 2004, bringing the remains of her prisoner-of-war father, who died in 1997. Baek tried to follow with her two children in 2009 and took refuge in the South Korean Embassy in Beijing.

The fourth defector’s identity is unknown. All four were being questioned by security agencies as of yesterday before they are put into a program for defectors to adjust to South Korean society.

It is the first time that China has allowed North Koreans taking refuge in consulates to leave since February 2008, when President Lee Myung-bak took office. China has gotten tougher on North Korean defectors since 2009, refusing to issue visas to defectors staying in South Korean consulates.

The four defectors allowed to come to South Korea left China in the form of deportations.

China promised cooperation on the issue of defectors in the consulates during a South Korea-China summit in Beijing in January.

In a follow-up meeting with Lee on the sidelines of the Seoul Nuclear Security Summit on March 26, Chinese President Hu Jintao said China would be flexible on the issue.

Civic groups and politicians in the South have waged rallies urging China not to repatriate the defectors arrested since February.

Tens of thousands of North Koreans are estimated to be residing in China after escaping the North.