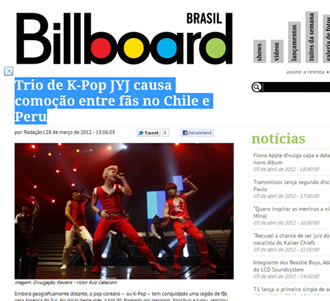 JYJ is as popular as ever in South America, this time snagging positive reviews from two of the continent’s well-known media outlets.

According to CJeS Entertainment on April 4, the band was mentioned on the Brazilian Web site of Billboard.com as well as in a Peruvian daily newspaper, El Comercio.

The Brazilian counterpart of the U.S music charts website Billboard.com featured special coverage of the Korean boy band on March 28.

“Despite being from a land a far, the three members brought South America to a standstill when they toured Chile and Peru in early March,” the site raved.

Meanwhile, El Comercio reported on March 14 that the Korean trio had a “following bigger than Britney Spears and Black Eyed Peas, as was evident by their throngs of fans.”

The newspaper also mentioned that the band’s debut album from 2010 was especially noteworthy, as the album contained the song “Ayyy Girl” featuring U.S. rapper Kanye West. It further detailed JYJ’s world tour, which began last April and consisted of stops in 15 cities with performances for 210,000 fans.

Since wrapping up the world tour in Peru last month, the band members have taken a break from singing in favor of acting.

Kim Jae-joong is currently gearing up to appear in the MBC drama “Dr. Jin,” Park Yu-chun is starring in the new SBS drama “Rooftop Prince” and Kim Junsu is performing in the musical “Elisabeth.”