Air Force chief of staff to step down

Air Force chief of staff to step down 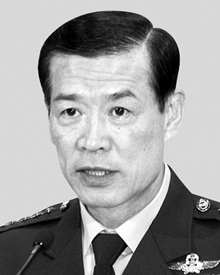 Air Force Chief of Staff Park Jong-heon will be replaced later this month, the Ministry of National Defense said yesterday.

“Defense Minister Kim Kwan-jin phoned Park on April 3 and told him that he is subject to the regular reshuffle in April,” said an official from the Ministry of National Defense. “His replacement was to be made this month because the next scheduled reshuffle is in October, and it will be too late to replace him then.”

It is part of customary military practice for senior commanders to make way for younger ones, the official said.

Park, 58, has served in the current position for 19 months since September 2010. The Korean military law stipulates the term of the commanders at 2 years, although the reshuffle window is plus or minus six months, the official said. The military conducts a personnel reshuffle at the senior level twice a year, once in April and once in October.

Park will likely be the only general to be replaced this month. Defense Minister Kim Kwan-jin told reporters yesterday that the Army generals are not among those to be replaced this time. Six of the eight generals in the Korean military serve in the Army. Kim Sang-ki, Army chief of staff, has served for 16 months in the position.

Apart from Park, the other general is Choi Yun-hee, the Navy chief of staff who was appointed to the position only five months ago.

Who will replace Park is not determined, the official said. That has raised the eyebrows of some, as the military, to avoid a vacuum in leadership, customarily announces a replacement of a commander after his successor is determined.

Some observers told the JoongAng Ilbo that the replacement may hold Park responsible for a series of mishaps involving the Air Force. Last November, an Air Force officer was found to have negligently disposed of classified documents including operational plans regarding a provocation from North Korea in 2010.

Some senior Air Force officials’ outright opposition to the defense reform measures being pushed by the defense ministry may have affected the decision to replace him, others said.

A source told the JoongAng Ilbo that the change-of-command ceremony will be on April 18 and Park’s successor will likely be determined before then.