Lantern of lions, legend of flowers

Lantern of lions, legend of flowers 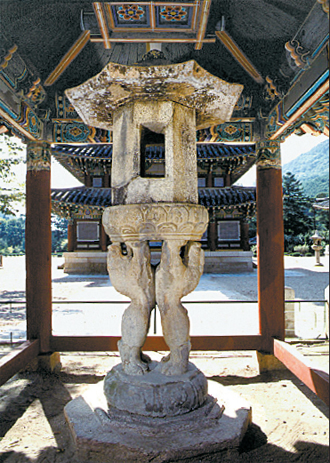 The lantern is estimated to have been built in 720 in the 19th year of King Seongdeok’s reign. At that time, the use of two stone lions as pillars was unique because other stone lanterns had octagonal pillars. After it was made, numerous imitations appeared.

In July 2008, a small, delicate white flower that was believed to have been from the udumbara fig tree, or ficus racemosa, bloomed behind the lantern. This event was significant within the Buddhist community, which regards the flower as a symbol of rare events because it was once believed to bloom only once in 3,000 years. In fact, the flower blooms inside the fruit of the tree, which is the case with all figs.