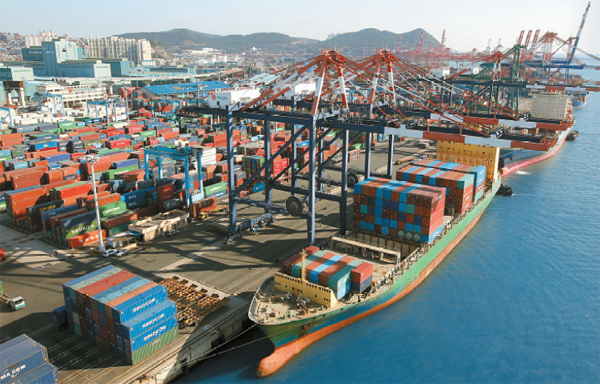 The shipping industry is showing nascent signs of recovery after falling on hard times since the fiscal crisis in southern Europe dragged down the global economy.

Now major shippers in Korea have begun raising their rates as they follow in the shoes of their global peers and rivals.


Hanjin Shipping, the nation’s No. 1 shipper, notified its customers early this month that it was raising its shipping rates by $400 per 40-foot container for freight between Asia and the Americas. This came on the heels of a $300 increase in March. The shipper said it was not sure whether it will execute further hikes in May or June.

“I believe the shipping industry is bottoming out,” a Hanjin spokesman said. “The shipping rate has rebounded and it is slowly improving.”

The move by Hanjin came after Maersk, the world’s biggest shipping company, raised the rate by $775 per TEU, or 20-foot container, for freight between Asia and Europe in March. MSC and CMA-CGM, the world’s second- and third-largest shippers, also raised their rates by $750.

According to the Hanjin spokesman, local shipping companies tend to move quickly to stay in step with the moves made by the world’s biggest players.

But even though the shippers raised their rates, shipping charges do not automatically go up. Shippers need to renegotiate charges with their customers and sign service contracts, the spokesman said. 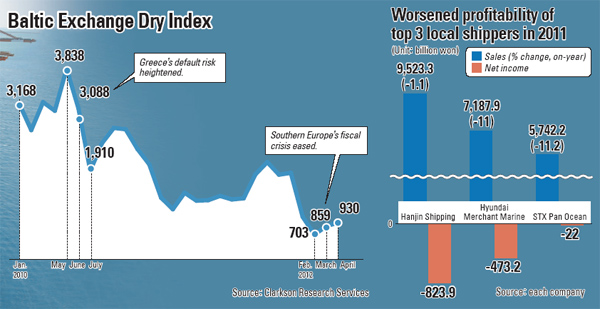 The Baltic Exchange Dry Index, a gauge of global shipping rates, also moved up in March after its monthly average sank to a nearly three-year low of 703 in February. The index, which is issued daily by the London-based Baltic Exchange, provides an assessment of the price of moving major raw materials around the world by sea.

An index above 2,500 typically indicates that the shipping industry is in good health and shippers are managing to turn a profit. However, a reading below 1,000 would suggest that even leading global shippers like Maersk are experiencing difficulties. During the global financial crisis in 2008, the index plunged to around 600.

Due to the global economic slump in 2010 in the fiscal crisis in the euro zone, demand for shipments declined sharply. Maersk led price competition by drastically cutting its rates, which led major local shippers to shed profits. Hanjin Shipping, Hyundai Merchant Marine and STX Pan Ocean, the country’s top three shippers, all turned a loss in 2011.

But analysts predict a turnaround in their fortunes this year. “There has not been any significant rise in the amount of freight shipped, but the market is certainly bottoming out,” said Park Eun-kyung, an analyst at Samsung Securities.

Park said the decreased supply of shipping services has effectively bumped up shipping rates. “The operating ratio of shippers declined considerably,” Park said. “Hanjin and Hyundai are likely to move into the black this year, but STX may not.”

With the shipping industry on a recovery track, some companies are increasing the size of their fleets. Hanjin said earlier it would invest close to 1 trillion won ($884 million) this year.

“Even though the shipping industry is having a hard time, we cannot do without investment,” Hanjin Shipping President Kim Young-min said earlier in an interview.

Kim said the company would bring in four 13,100-TEU container ships this year including the Hanjin Sooho.