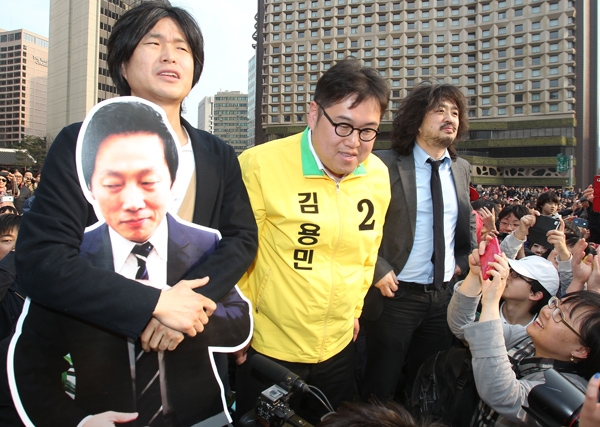 Kim Yong-min, center, with two other co-hosts of the podcast “Naneun Ggomsuda,” Kim Ou-joon, right, and Choo Chin-woo, left, at a campaign rally in Seoul Plaza yesterday. By Kim Do-hoon


The chairwoman of the main opposition Democratic United Party apologized for the foul language and raunchy jokes of a candidate running in the upcoming election, and said she tried to persuade him to give up the race, but he refused.

“I apologize for hurting all of the people including those supporting the DUP and our candidates,” Han Myeong-sook, the chairwoman of the party, said on Saturday in a statement announced by her spokesman.

“Candidate Kim’s remarks were definitely wrong regardless of reasons. I feel a heavy responsibility as the chairwoman of the party,” she said. “I suggested he step down, but he stuck to his position that he will be judged by the voters.”

Kim Yong-min, a co-host of the popular political liberal podcast “Naneun Ggomsuda” (“I’m a Petty-Minded Creep”) and a DUP candidate running in Seoul’s Nowon A District, has come under massive criticism for his shock jock-type jokes on the program in the past, foul language and insults of such groups as women, senior citizens and Protestants. 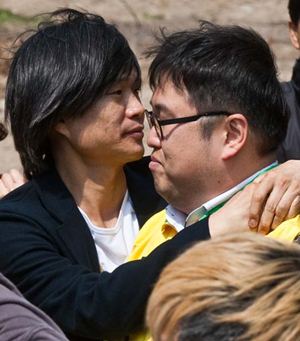 A video clip montage of some of Kim’s outrageous jokes and remarks was posted on YouTube last week.

Kim remains unwilling to leave the race. “I am determined to not give up the candidacy,” Kim said in an interview with Newsis on Saturday. “Reporting this case is a strategy to cover up the illegal spying scandal.”

Before the YouTube video, the biggest political issue in the campaign was an investigation of alleged illegal spying by the Prime Minister’s Office on critics and rivals of the Lee Myung-bak administration. The furor over Kim’s raunchy jokes has eclipsed that scandal.

Yesterday Kim held a campaign rally in Seoul Plaza attended by the two other co-hosts of the podcast, Kim Ou-joon and Choo Chin-woo. “There’s no word for giving up candidacy in his dictionary,” Choo said. “I will go to the JoongAng Ilbo and Chosun Ilbo to avenge [their reports on Kim].”

Currently, Kim is not allowing most reporters, both from conservative and liberal media outlets, from entering his campaign office in Gongneung-dong, northeastern Seoul.

Park Geun-hye, the interim leader of the ruling Saenuri Party, also lashed out at Kim’s remarks during campaign speeches in Daejeon and Cheonan.

“An opposition candidate is causing a problem by commenting on women, religion and the elderly, which I can’t even refer to,” Park said. “I can’t help but ask what our children will learn from him, and what the social responsibility is of the opposite party.”

A number of other DUP lawmakers have demanded that Kim stand down from the race. Lee Yong-deuk, a member of the DUP Supreme Council, told the JoongAng Ilbo on Friday that he sent a text message to Kim on Thursday reading, “Die for the organization when you should. Then we will respect you.”

“Other Supreme Council members also want him to abandon his candidacy,” Lee said.

Lee Hae-chan, a former prime minister in the Roh Moo-hyun administration and a DUP candidate running in Sejong City, said in an interview with Ohmynews, “If he can’t resolve the matter by apologizing, he should swiftly step down from the candidacy. If he won’t, the party [leadership] should show a clear position that they won’t protect him anymore.”