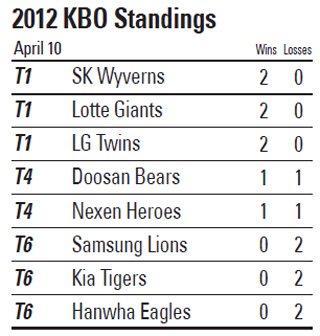 The 2012 KBO season started with a sell-out crowd on opening weekend, and the close results of the games already indicate the start of a tight race.

The LG Twins, a team expected to finish at the bottom of the KBO table this year, swept the defending champion Samsung Lions 6-3 on Saturday and had a 3-2 victory yesterday in Daegu. This is the first time since 2000 that the Twins, who haven’t reached the postseason in the last nine years, won both opening weekend games.

The Seoul-based Twins had a lot of drama in the offseason. Three core players - catcher Cho In-sung (SK Wyverns), outfielder Lee Taek-geun (Nexen Heroes) and pitcher Song Shin-young (Hanwha Eagles) - signed with other teams, while the club kicked out its two starting pitchers after a match-fixing scandal.

But with new manager Kim Ki-tae and the efficient management of its pitchers - such as using last year’s starting pitcher Radhamez Liz as a closer - the team has surprised from the start.

The Twins will host all six games this week at Jamsil Baseball Stadium in Seoul and will look to extend its winning streak. The team will meet the Lotte Giants, which also collected two wins against the Hanwha Eagles, in games from today to Thursday, and the team faces the Kia Tigers Friday to Sunday.

The Giants were thought to be at a disadvantage after slugger Lee Dae-ho left to join the Orix Buffaloes in Japan, but the cleanup trio of Jeon Jun-woo, Hong Sung-heon and Kang Min-ho are now leading the offense.

The Busan-based team was also worried about its bullpen since the newly-signed Chong Tae-hyon and Lee Seung-ho are out with injuries, but fireballer Choi Dae-sung and his fellow pitchers didn’t give up a single run last weekend.

The Giants will face the Doosan Bears, which split the opening series with the Nexen Heroes, on the weekend.

This season’s top title contenders - the Tigers and the Lions - will look for their first victory this season when they meet today to Thursday.

It will be interesting to see how the Tigers’ new manager Sun Dong-yol does against his former team. He previously coached the Lions from 2005 to 2010, earning two Korea Series titles. But the injury-plagued Tigers are giving Sun a hard time. The cleanup trio didn’t even feature on opening weekend.