Debate heats up on what prompted Posco’s stake sale

Debate heats up on what prompted Posco’s stake sale 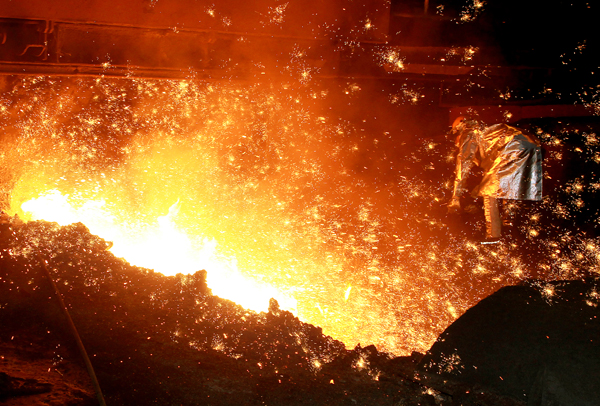 The possibility that Posco may be facing a liquidity crunch has become a hot market issue just one month after the incumbent chief began his second term.

Although the company said the sale was made in order to enhance its financial soundness and improve cash flow, analysts say the steelmaker may have been taking precautions to guard against another potential downgrade of its credit rating by international agencies.

“A review of the steelmaker’s credit rating will be conducted later this month. Posco seems to be trying to stop its level from being downgraded to Bbb,” said Byeon Jong-min, an analyst at Woori Investment & Securities.

Increasing its cash reserves would make the steelmaker less dependent on loans when it needs to make investments in resource development.

Standard & Poor’s cut Posco’s credit rating from A to A- last October, saying that the steelmaker’s results in the third quarter of fiscal year of 2011 were below its expectations. The agency forecasts a further deterioration over the next 12 months based on signs of slowing demand for steel and the company’s increasing debt ratio amid challenging industry conditions. Moody’s and Pitch showed similar sentiments.

Posco has been considered one of Korea’s most solvent companies along with Samsung Electronics, but this reputation is now in jeopardy as negative signs regarding its status quo flare up.

And lower expectations of Posco’s first-quarter performance this year are fueling the negative outlook.

Woori Investment & Securities projected that the steelmaker’s sales would be similar to that of the previous quarter, but its operating profit is expected to have declined by around 30 percent. It projected Posco’s net profit would stand at 437 billion won for the first quarter.

“This poor performance stems from falling prices of thick steel plates for ships and automobiles,” the broker said.

Some market observers point to Posco’s overly-aggressive mergers and acquisitions as one of the main reasons it decided to sell off the recent stakes in the three companies.

As of February, CEO Chung Joon-yang has overseen over 30 M&As since he took office in February 2009, according to the Fair Trade Commission. Under his stewardship, the number of its subsidiaries also shot up from 36 to 70, the commission said.

One of the major moves to influence the steelmaker’s balance sheet was its acquisition of Daewoo International in 2010, said Byeon, the analyst at Woori. Posco bought the trading company for 3.37 trillion won, its highest price in the last three years.

“Posco had to shoulder the burden of the trading firm’s financing costs, which has affected its fiscal soundness in a negative way,” he said.

However, the analyst did not agree with the criticism that the steelmaker has eaten up too many small companies, causing it to run short of cash. The Posco Family, referring to a group of companies acquired by the steelmaker, includes companies that are not associated with steel making, such as LED and electronics-parts manufacturers, and nut-and-bolt makers.

Sungjin Geotec, a plant equipment manufacturer, registered falls in its net profits until last year, even though it has been a member of the Posco Family for two years. It recorded a 59-billion-won loss during the first three months of this year, worsening from a 35-billion-won loss last year.

Unexpected delays in the steel giant’s overseas projects and huge investments outside Korea have exacerbated its current woes. Posco has poured $12 billion into constructing an integrated steel mill in Orissa, India, the largest amount of foreign investment in the country. However, construction has not been able to get under way due to strong opposition from local residents and the complex bureaucratic rules of India’s central and state governments.

Recently, the financial sector has been releasing fewer positive outlooks on the steelmaker as the industry is expected to remain in a downturn due to sluggish demand for steel worldwide.

“The recession in the global construction and shipbuilding markets has influenced the steel industry, keeping global demand for steel materials low,” said Park Hyun-wook, an analyst at HMC Investment & Securities.

“Although Posco may be able to show some improvements in the second quarter, it will be hard for it to recover to its normal performance this year,” said Park.