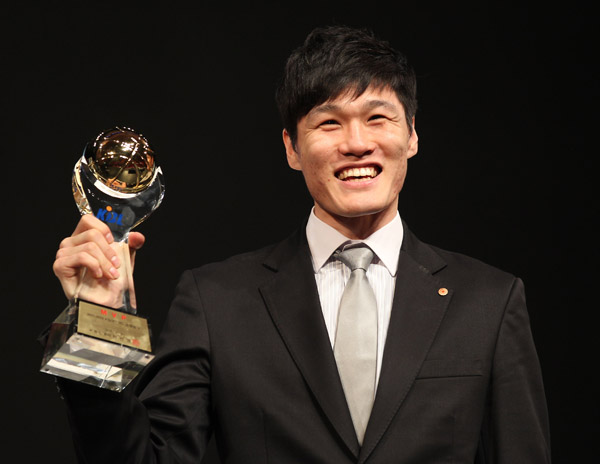 Wonju Dongbu Promy’s Yoon Ho-young smiles with the 2011-12 KBL MVP trophy at the Seoul Education and Culture Center on Monday. By Chung Si-chong


Wonju Dongbu Promy forward Yoon Ho-young earned the Most Valuable Player award for this season of the Korean Basketball League after leading his club to a historical regular season.

Yoon, who made his professional debut in 2008 as the third pick in the draft, previously had no luck with individual titles. In fact, the 28-year-old hasn’t been selected for the All-Star Game and was shadowed by teammate Kim Joo-sung, the two-time KBL MVP winner. Since then, Yoon has proved he can hold his own.

In the regular season, Yoon averaged 11.96 points, 5.2 rebounds and 2.6 assists. Although his numbers weren’t dominant, the 197-centimeter (6-foot, 5-inch) forward helped his team both inside and outside the paint. He marked 1.4 blocks per game, first among Korean players, and had a 3-point success rate of 40.7 percent.

“I could have given a better performance if I could play for the team next season,” said Yoon, who will be joining the Korea Armed Forces Athletics Corps (Sangmu) on April 30 for his military duty.

“But wherever I go, I want to be like Joo-sung, who always gives his best every game.”

Oh, who was the playoff MVP after leading his club to the KBL championship, had to settle for the Rookie of the Year award. The 25-year-old, who can play both forward and center, had an average of 15.2 points, the best among Korean players, and 8.1 rebounds, the third most among local players.

If Oh won the MVP, it would have been the second time in KBL history that a rookie claimed both Rookie of the Year and the MVP award since Kim Seung-hyun of the Seoul Samsung Thunders did so in the 2001-2 season.

“I knew the MVP award would be given to a Promy player who won the regular season title,” Oh said. “But I’m happy that I got the award that you can receive only once in your lifetime.”

Promy coach Kang took the Coach of the Year award after guiding his team to historical regular season.

Although the team gave up the championship title to the KGC, Kang’s side clinched the regular season title with the most wins (44), longest winning streak (16) and highest winning percentage (.815) in KBL history.

The 46-year-old, who is in his third season as coach, collected 78 votes out of 80 and took home his first Coach of the Year award.

“I thought I was going to be really happy, but actually I feel a little bad maybe because we didn’t get the good result in the final series,” Kang said. “But this is a good award for me and I will try to step up as a better coach next season.”

Meanwhile, the WKBL also wrapped up its season with an award ceremony on Monday.

It was the first time since 2007 that the MVP was given to a player whose team did not win the regular season title. Shin, who became the No. 1 rebounder for the fifth consecutive season, also took the Best Defender and Team Contribution awards.