For 27 local indie bands, life in Seoul isn’t too hard to define. It’s what they sing about: from music parties in Itaewon to pretty ladies walking the streets of Hongdae. But some leaders of the genre came to realize recently that music fans might not know what the indie scene here is really about, and so have set out on a project to set the record straight, with music, of course.

In a new compilation album titled “Seoul Seoul Seoul,” these indie musicians, ranging from first-generation indie bands who started performing during the mid-1990s to the up-and-comers, more than a year of work comes together as they try to put their everyday lives into lyrics. 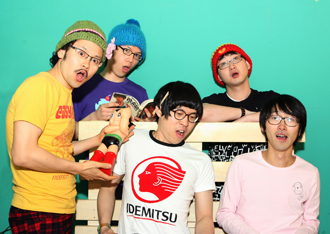 Indie band Oysterboys is one group that is featured in “Seoul Seoul Seoul.” Provided by the band

The album is expected to be a milestone for the blossoming indie rock scene, centering around the Hongdae area in western Seoul. Recording took place in several places around Seoul, including in Hongdae. There are various genres of music included: folk, rock, blues, and electronic music.

How it all came together

The initial idea for this project came from the heads of three top independent labels in Korea, including Lee Sung-bae, 36, vice president of Cavare Sound; Lee Bong-soo, 40, head of Beatball Music; and Kim Min-gyu, 41, head of Electric Muse. The three have known each other for more than two decades since the mid-1990s, when the Korean indie scene began to take off.

And one day last year, the agency heads said they were just hanging out together when the idea of doing something new came to them. Their project came to be called “Round and Round,” a series of joint performances with musicians from their record labels. Recordings from the performances make up the album “Seoul, Seoul, Seoul” which was released last month.

“We contacted not only old indie bands that have performed in Hongdae for a long time but also other musicians who have done more independent work instead of performing at the big venues,” Lee Bong-soo said.

Of the 27 artists who participated in the project, 11 teams belong to the three organizers’ labels, but others are from small labels or are completely independent.

There are various artists from the 1990s, including Bang Jun-seok and Lowdown30 as well as new artists, 9 and The Numbers, The Freaks, and Ha Heon-jin.

Two musicians who participated in the recording, Kim Min-gyu and Lee Sung-bae, have been closely involved in the indie scene for some time, observing the changes over the past few years.

In discussing their work on an album meant to help define indie to fans in Korea, Kim and Lee both said they feel the public tends to negatively stereotype their genre, in part because of the way it has been portrayed by the media.

While a member of Oh! Brothers, Lee said he would avoid appearances on music and entertainment programs because of the way indie performers were portrayed, instead he appeared on documentary programs.

“The scene was usually about leaky ceilings and eating ramen, even though they filmed scenes in which we ate other foods,” he explained.

And Kim added that he felt the public misunderstood what exactly it means to be indie, or independent from traditional music labels, holding indie artists to different standards to more commercialized performers and viewing them as poor guardians of the arts. “Indie labels have to pursue profit, too, but some people blame us if we seek profits,” Kim said. Movie producers have tried to use indie music for free and film festivals often expect free street performances, he said.

“Seoul Seoul Seoul” may help to define indie music differently in fans’ minds, and the three leaders of the project said the album would be a chance for the music, and Seoul itself, to be seen from different viewpoints, fans’ and performers’ alike.