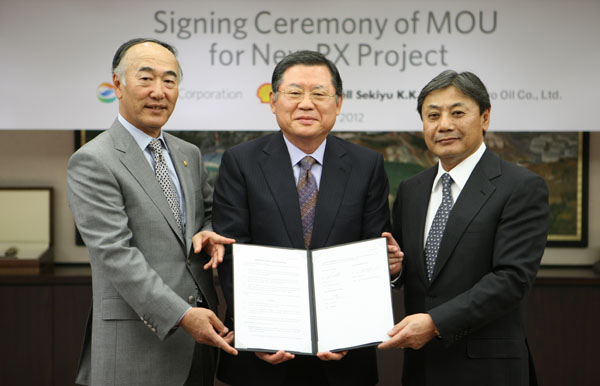 
GS Caltex will forge a partnership with Japanese energy and petrochemical companies with the goal of becoming the world’s largest paraxylene (PX) producer.

Among other uses, PX is a key component in producing plastic bottles.

The company, one of the leading oil refiners in Korea, announced yesterday that its Chairman Hur Dong-soo signed an MOU to this effect in southern Seoul with Showa Shell Sekiyu K. K. Chairman Shigeya Kato and Taiyo Oil President Yutaka Oka.

According to the deal, the three energy companies agreed to increase PX production at the GS plant in Yeosu, south Jeolla, by one million tons.

The latest contract will serve as a crucial opportunity for GS to enhance the competitiveness of its PX business through cooperation with leading Japanese energy companies, the company said.

The Yeosu plant will become the single-largest PX factory in the world, with an annual capacity of 2.35 million tons, GS said. Until now, the refiner has ranked fourth globally with a PX output of 1.35 million tons.

One million tons of PX is equivalent to two billion units of clothing or 40 billion 1.5-liter polyethylene terephthalate (PET) bottles.

GS expects to achieve an increase of more than $1.7 billion in annual exports by raising PX sales in overseas markets including Asia.

“As the polyester market grows in line with rising global demand for textiles and PET bottles in China and India, the latest expansion of the PX plant will help GS secure a consistent source of profit and enhance the competitiveness of its exports,” an official explained.

GS has been investing in the petrochemical business ever since it completed its first aromatics plant in 1990. The company has the capacity to produce 2.8 million tons of aromatics a year, including benzene, toluene and xylene.

It sells its petrochemical products to over 10 countries. Sales stood at 5.83 trillion won ($5.12 billion) last year, with exports accounting for about 5 trillion won, or 87 percent of the total.