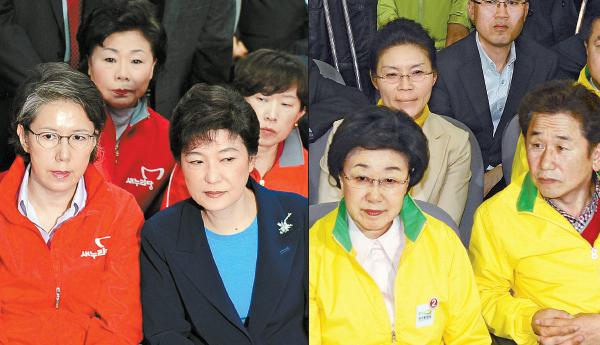 The ruling Saenuri Party looked set to win the largest number of seats in the National Assembly in yesterday’s general election, with lower support than expected for the liberal alliance between the Democratic United Party and the Unified Progressive Party.

As of 9 p.m. last night there was a slim chance the Saenuri Party could hold onto its majority.

An analysis by the KBS television network said with 29.8 percent of the ballots counted the Saenuri Party was leading in 126 constituencies. The DUP was leading in 107 races and the UPP in six.

The Saenuri Party’s surprising comeback from behind was attributed to the leadership of Park Guen-hye, the convervatives’ frontrunner for the presidential election in December.

The liberals were most damaged by a furor over raunchy and sexist remarks by its candidate Kim Yong-min, a cohost of popular podcast “Naneun Ggomsuda,” who refused to leave the race.

But final results were not available until the last votes were counted late last night or this morning because of the number of neck-and-neck races.

“Only months ago, the forecast was so gloomy that the people said it would be hard for us to win even 100 seats,” said Lee Hye-hoon, the chief campaigner for the Saenuri Party, at a press conference last night. “We have come this far with bone-aching efforts to reform. No matter how many seats the voters give us, we will gratefully and humbly accept their verdict.”

According to the exit poll conducted jointly by the nation’s three major broadcasters, the Saenuri Party and the Democratic Untied Party were neck-and-neck in the number of seats they were winning, with the Unified Progressive Party following at a distant third.

With many constituencies too close to call, the KBS, MBC and SBS networks released differing analyses.

While the exit poll showed that it was too tight to say which party would win the most seats, it appeared that the liberal alliance has gained control of the 300-member legislature.

The UPP may be poised to become the make-or-break vote in the next National Assembly, while other minority parties showed poor results and have shrunk in significance.

The exit poll showed that the DUP would see an overwhelming victory in Seoul by winning most working-class constituencies, while the Saenuri kept its traditional strongholds in affluent districts in the southern part of the city.

Taking place only months before the Dec. 19 presidential election, yesterday’s election was seen as a crucial test of the political landscape and the results will shape the campaign strategies of the presidential hopefuls.

Polling stations around the country opened at 6 a.m. and closed 6 p.m.; the turnout was 54.3 percent. That was higher than in the previous legislative elections in 2008, when 46.1 percent of eligible voters voted.

The final outcome was expected to be announced late last night or early this morning, as many races were too close to call until the last votes were tallied.

The allocation of the 54 proportional representatives also became more important than ever, determining which party would be the greatest power in the National Assembly.

Amidst neck-and-neck races, some clear frontrunners were seen. The KBS poll showed that the DUP’s Moon Jae-in, former chief of staff of the late President Roh Moo-hyun, was leading the race against the Saenuri’s reform icon Son Su-jo by 58.4 percent to 40.7 percent.

In Seoul’s Gangnam B District, the ruling and opposition parties’ candidates clashed over the Korea-U.S. free trade agreement during the campaign. The exit poll showed that Kim Jong-hoon of the Saenuri Party, a former trade minister who concluded the FTA negotiations, won 54 percent, while Chung Dong-young of the DUP, who campaigned against the trade deal, won 45 percent.

In one of the most-watched races in Jongno District, Chung Sye-kyun, former chairman of the DUP, won 54.1 percent, the exit poll showed, while Hong Sa-duk of the Saenuri Party trailed with 43.8 percent.

In Seoul’s Nowon A District, it appeared that the DUP’s Kim Yong-min suffered from the fallout over his politically incorrect jokes and foul language on a popular liberal podcast. The exit poll showed that Saenuri’s Lee No-geun won 50.2 percent of the votes in the working-class neighborhood, which traditionally voted liberal, while Kim won 44.8 percent.

In the newly created constituency for Sejong City, the DUP’s Lee Hae-chan, former prime minister in the Roh Moo-hyun government, and Sim Dae-pyung, head of the Liberty Forward Party and former governor of South Chungcheong, had a neck-and-neck race. Lee was backed by 41.3 percent, while Sim won 38.3 percent, the poll showed.

Another tight race took place in Dongjak B District, where the Saenuri’s Chung Mong-joon won 47.9 percent, and the DUP’s Lee Kye-ahn 47 percent. In Seoul’s Eunpyeong B District, Cheon Ho-seon of the UPP won 50.8 percent, while Lee Jae-oh of the Saenuri Party won 47.3 percent.

DUP Chairwoman Han Myeong-sook entered her party’s headquarters around 5:54 p.m. with a solemn face to watch the exit poll broadcast with party officials. After the reports showed that the DUP hadn’t clinched the most number of seats - the largest party appoints the speaker and has power over committees - Han left without any comment.

The Blue House yesterday remained tense as the election outcome will affect the Lee administration’s final days. If a liberal alliance of the DUP and the UPP becomes the majority in the legislature, the Lee administration will inevitably face strong political attacks, including a demand by the National Assembly for a hearing on the illegal spying scandal that made headlines during the campaign. The administration would also face difficulty wrapping up its signature projects in the final months.

President Lee Myung-bak and Kim Yoon-ok, the first lady, brought one of their granddaughters to a polling place in Hyoja-dong, central Seoul, near the Blue House and posed for pictures at a ballot box.

Seoul Mayor Park Won-soon took a photo of himself in front of a polling station in Hyehwa-dong, northern Seoul, after voting.

Ahn Cheol-soo, a potential presidential candidate and a popular figure among the younger generation, told reporters after voting, “I just judged which candidate is a better person by carefully reading the campaign leaflet.”