Dancers show off their six packs in ‘Spartacus’

Dancers show off their six packs in ‘Spartacus’ 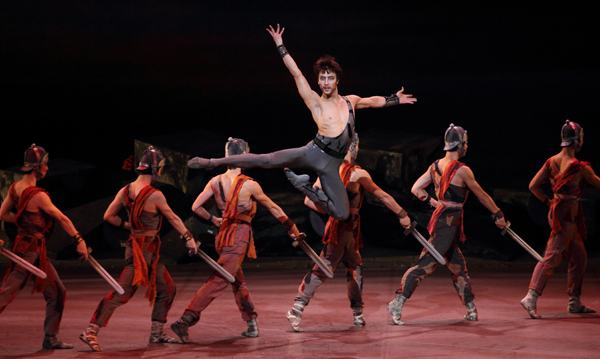 In celebration of its 50th anniversary, the Korean National Ballet presents “Spartacus,” choreographed by legendary Russian dancer Yuri Grigorovich, from tonight to Sunday. Provided by the organizer

Starting from tonight until Sunday, the Korean National Ballet Company is scheduled to perform the famous work choreographed by Russian dancer Yuri Grigorovich for the first time in five years at the Opera House of the Seoul Arts Center. The Korean National Ballet was the first team to perform the Grigorovich’s “Spartacus” in Asia in 2001 and again in 2007.

This year’s shows will be different, organizers said, as the Korean National Ballet will perform the ballet on its own. The previous two performances were joint works by the Russian and Korean ballet companies.

Although more widely known today as the American television series, “Spartacus” was first produced as a ballet in 1956, choreographed by Leonid Yakobson and performed by the Mariinsky Ballet Company. Then, another version - choreographed by Igor Moiseyev - was produced in 1958. However, Grigorovich’s “Spartacus,” which was staged in 1968, achieved the greatest acclaim.

The ballet, which is about Spartacus, a soldier turned gladiator turned runway slave who fought Rome as the leader of a massive slave army, opens with a scene of the Roman consul Crassus conquering Thracia and returning to Rome after his latest conquests. Among his captives are the Thracian king Spartacus and his wife Phrygia. Both lament their captivity and bid bitter farewells as Phrygia gets taken to join Crassus’ harem of concubines.

“Although it is difficult to judge the ability of the Korean National Ballet company as many new dancers joined the company, their level can be presumed as they gave me a great impression during the successful performance of ‘Romeo and Juliet’ at the Bolshoi Theatre of Russia in Moscow two years ago,” Grigorovich said.

The performance will be accompanied by the Korean Symphony Orchestra under the baton of Marzio Conti, an Italian conductor. According to the organizers, Conti is often referred to as “the third dancer” for his “oneness with the performance while he conducts the orchestra.”