Ha Ha suffers from insomnia due to ‘Infinite Challenge’

Ha Ha suffers from insomnia due to ‘Infinite Challenge’ 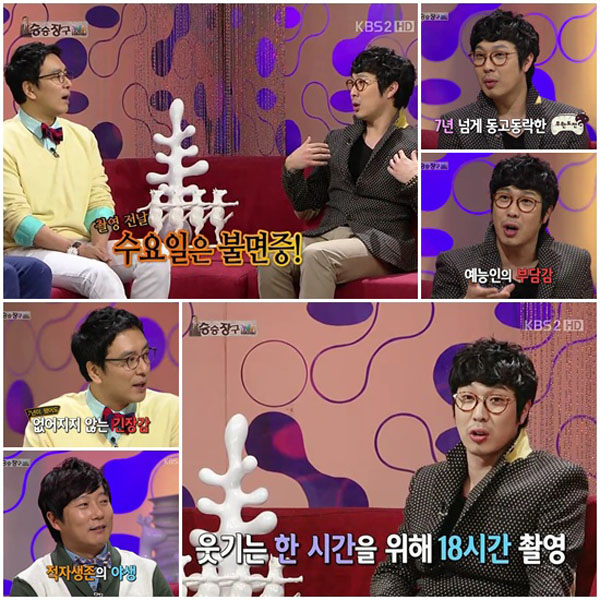 Singer-turned-TV personality and regular fixture on “Infinite Challenge” Ha Ha has confessed that he experiences insomnia every night before the day of shooting for the hit show.

On an episode of KBS 2TV’s “Win Win,” the entertainer said that for the past seven years, he tosses and turns on Wednesday night as his body senses that Thursday, recording day for “Infinite Challenge,” was around the corner.

“You know for the viewers, it’s 90 minutes of fun, but for the cast and crew it’s 18 hours of nonstop filming. Wednesday is the night I don’t sleep, and at first I thought it was just me, but other members have confessed they suffer from insomnia the night before,” Ha Ha said.

“Don’t get me wrong, it’s a lot of fun filming, but it’s a lot of mental stress to be in character mode for such a long time. And as soon as the camera’s zoomed out on you, it’s a constant battle among the contestants to see who can be the funniest to make it on the screen.”

Meanwhile, “Infinite Challenge” has been off the air for the past 10 weeks as a result of TV networks’ strike which began in late January, with MBC taking the first stand against biased reporting.