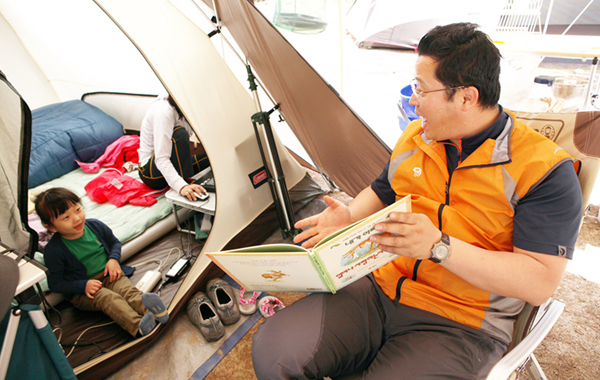 With Korean schools officially launching their five-day school week this semester, sales of camping and outdoor goods are surging. This photo shows a father reading to his daughter in a tent. Provided by Coleman Korea


Elementary, middle and high schools officially adopted a five-day school week in March, but it isn’t just students who are happy with the change.

The new school week is also a boon for retailers in the travel, outdoor and camping industries as they saw sales surge on-year in March. These are believed to have been fed by parents going on buying sprees in their bid to get their kids out of the city on weekends to enjoy some quality family time together trekking on mountains and in the countryside. 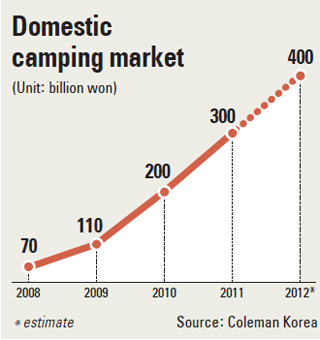 To tap these customers, retailers have rolled out various marketing promotions and education programs for both parents and children to enjoy.

According to industry sources, the camping industry usually sees sales boom in May as people buy tents, sleeping bags and other camping goods ahead of the summer vacation.

This year, however, the clock has been brought forward to February and March thanks to large part to the five-day school week as camping goods have been flying off the shelves.

“In March, we released the WeatherMaster Wide 2-room Cocoon tent that can accommodate up to six people, and 40 percent of the tents we prepared to sell this year went in the first month,” said a spokesman at Coleman Korea.

The company has been running a one-night, two-day camping program since 2008 to hone in on families with elementary school children.

The event gives families an opportunity to experience camping life as they learn from experts how to set up tents, start fires for barbecues and properly use other camping goods. From this year, Coleman is also running a new one-day camping school to reach more customers.

Kolon Sports said February and March sales of its camping goods rose 150 percent and 300 percent, respectively, on year. Sales in these months are traditionally sluggish due to the cold weather but the new school hours have overturned this, it added.

Columbia Sportswear has been running a trekking school targeting active people who like to amble around rivers and mountains since 2008.

“We run this program 18 times a year, and each program can accommodate up to 80 people,” said a spokesman for the company. “Our main target customers used to be in their 30s and 40s, but now we expect to see more elementary, middle and high school students.”

Last year, the domestic camping goods market was worth 300 billion won ($264 million), but it is estimated to expand to 400 billion won this year.

Supporting this argument, Galleria Department Store said its March sales of leisure and camping goods went up 17 percent from the same month in 2011. E-Mart said its tent sales in March saw an 11-fold increase from the previous year, and Lotte Mart saw March sales of its cameras and camcorders climb 20 percent.

Meanwhile, five-star hotels such as Shilla Hotel Jeju, Lotte Hotel Jeju and Westin Chosun Busan are receiving more calls from customers who want to reserve hotels near or even at campsites. Shilla Hotel Jeju said its hotel room reservation rate shot up 15 percent on-year in April and May after it launched a new luxury campsite in March.