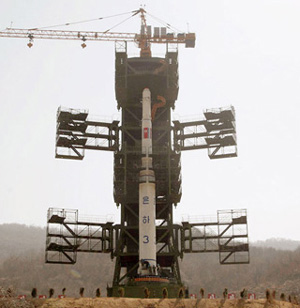 North Korea defiantly fired off a long-range rocket Friday, officials said, in a move sure to spark strong international condemnations and escalate regional tensions.
The Unha-3 rocket took off from the Tongchang-ri launch site at 7:39 a.m., Defense Ministry spokesman Kim Min-seook said, adding that South Korean and U.S. intelligence authorities are trying to confirm whether the launch was successful.
"We're now tracking the flight path," an official said on condition of anonymity.
U.S. news cable channel CNN, citing a U.S. official, reported the launch ended in failure.
South Korean President Lee Myung-bak plans to hold an emergency meeting of security related ministers at 9 a.m. to discuss countermeasures, officials said.
The North had said it would launch the rocket between April 12-16 to put what it claims is a satellite into orbit to mark the 100th birthday of Kim Il-sung, the country's late founder and grandfather of current leader Kim Jong-un.
But South Korea, the United States and other regional powers had urged Pyongyang to call off the launch, seeing it as a pretext to disguise a long-range missile test, banned under a U.N. Security Council resolution.
Foreign news reports said the U.N. Security Council plans to convene an emergency meeting.[Yonhap]