No spring yet for Korea’s frozen real estate market

No spring yet for Korea’s frozen real estate market 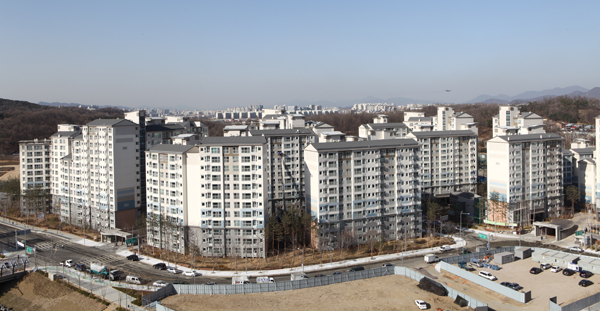 Korea’s real estate market shows signs of being in the deepest slump in seven years, and analysts say that the rut is likely to continue for the rest of this year due to a lack of efforts from the National Assembly to revitalize the market.

Although the government could come up with some relief measures soon, analysts said policies that would be most effective in breathing life into the market have a slim chance of seeing the daylight, as they could exacerbate what is already a high amount of debt in Korean households.

Such a slump is atypical for Korea, where the combination of elections and the springtime moving season has lifted the real estate market in the past. But unlike during the 2004 and 2008 general elections, when politicians promised “new town” developments, the National Assembly candidates in the recent campaign barely raised issues related to real estate and property prices.

“The desire to buy housing units has declined for both investors and end users,” said Lee Young-ho, head of research at Dr. Apt. “Even now, after the general election, the property market’s outlook is not bright and second-quarter transactions will not increase easily.”

Real estate is the main asset in the average Korean household, accounting for 56.5 percent of total assets, according to 2011 Statistics Korea data.

Because it was standard practice to take out mortgages to buy real estate as prices steadily rose before the 2008 international financial crisis, the country has an estimated 1,000 trillion won ($883 billion) in national household debt and an ever-increasing strata of “house poor” people: families who spend a large proportion of their income on mortgage payments and have little left to spend elsewhere.

Analysts say the new National Assembly beginning its term on May 30 is unlikely to jumpstart the market.

Measures announced by the government all but failed to be passed by the previous parliament, including: removing the upper limit on certain housing prices; abolishing the heavy income tax rate applied when owners of multiple houses sell a house; plus ending for two years the 50 percent tax on any excess profit from reconstructed houses.

Although analysts viewed some measures as more likely to pass than others, most expected the ruling Saenuri Party to have a hard time easing regulations.

“The main legal revisions under dispute, such as abolishing heavy income tax rates for homeowners of multiple houses, can stir up controversy as tax cuts for the rich,” said Kim Ji-yeon, a researcher at Real Estate No. 1, another property data provider. “Saenuri will have difficulty in proactively easing housing regulations before the presidential election.”

“We welcome that housing prices have stabilized, but frozen transactions are not ideal,” Finance Minister Bahk Jae-wan said last week. “The government will release measures that keep prices down but reinvigorate transactions.”

While the government is likely to ease some housing sales regulations for three popular southern Seoul districts - Gangnam, Seocho and Songpa - analysts said it is less likely to lower the 40 percent cap on debt-to-income ratios or loan-to-value ratios on mortgages to keep snowballing household debt under control.