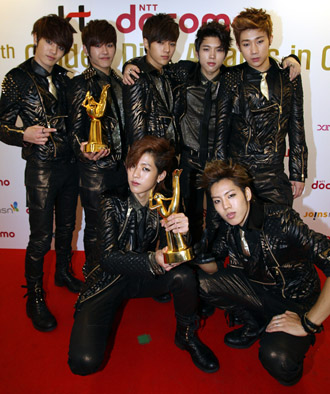 Boy band Infinite held a special party on April 13 titled, “You Are My First Galaxy Player,” which was attended by 500 lucky fans who had gone into a draw, withstanding the ratio of one out of 15 for a spot at the event.

The event was launched to share with teenagers about the benefits of owning a Samsung Galaxy Player, which is the multipurpose MP3 player that the band promotes.
Infinite sang hit songs such as “Paradise,” “Nothing’s Over” and “Be Mine.”
A special dance-off between fans and the band members also took place.

During a special talk forum, fans asked questions to which the band members answered candidly.
As the party was held on “Black Day,” — a day celebrating being single in Korea — Infinite also topped the night by giving out chocolates to fans as the night drew to an end.
By Carla Sunwoo [carlasunwoo@joongang.co.kr]