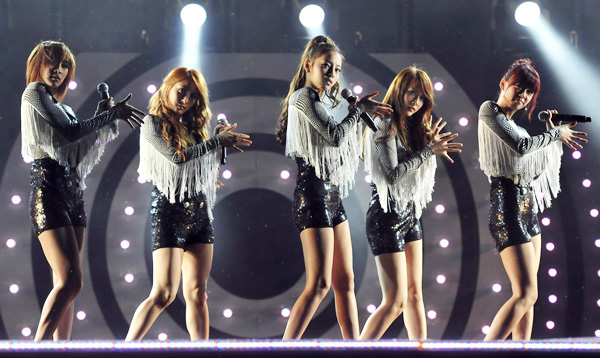 
KARA kicked off the Japanese leg of its Asian tour “Karasia” on Saturday in Yokohama. The band moves on to Nagoya for shows on Wednesday and Thursday followed by performances in Osaka, Fukuoka, Tokyo and Saitama, keeping the girl group busy until late May.

In all, KARA will visit six cities in Japan and perform in front of more than 130,000 fans.

The girl group held a press conference ahead of its Yokohama concert and talked about the upcoming tour, including the difficulty in performing so many shows in front of such large audiences.

“It’s been five years since we made our debut,” Seung-yeon said. “We’ve improved a lot, but there were difficult times too. We gave it our best and there were times when we were absolutely exhausted. But we needed to go through those difficult moments to get to where we are now.”

The “Karasia” tour began in Seoul on Feb. 18 and will take the group to Japan, China, Hong Kong, Taiwan and Thailand.