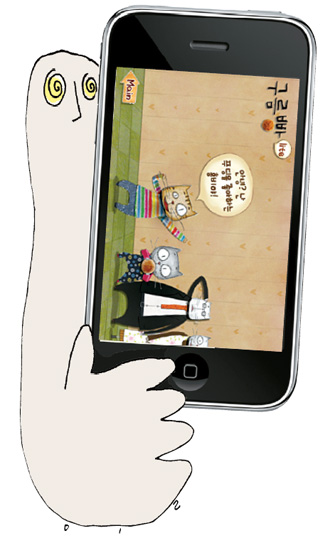 Ahn Jae-won, the father of a 4-year-old boy, purchased an iPad a few months ago after his laptop broke. He thought the slim and slick tablet would be a suitable replacement, unaware of the many problems the Apple product would cause.

Ahn marveled at his son’s ability to navigate the gadget, tapping the screen instinctively. Indeed, it took only a few pokes for the toddler - who thinks about cars from the moment he wakes up until he falls asleep - to play racing games and find videos of his favorite model cars on YouTube.

At first, Ahn was impressed with the iPad’s potential for his son.

“There are many quality apps for children, like ones that help them to learn foreign languages,” Ahn said. “I was also thrilled that there are applications which help little kids learn how to read books.”

But soon the tablet made the list of the household’s unspeakable words, joining such imprecations as pizza, coke and candy. His son never wanted to stop tapping away.

Ahn said it was always hard to put boundaries on the use of the iPad. “Once he grabs it, he doesn’t want to let go of it, but I should stop him from using it longer than promised,” he said. “He eventually cries a river and that’s how we terminate the quarrel over the iPad. I keep wondering whether or not it’s good for my kid.”

Ahn is not the only parent who is skeptical of the use of digital gadgets among toddlers. With the explosion in smartphone usage in Korea over the past decade, toddlers as young as 1 and 2 years old are constantly exposed to portable devices. Angry Birds and other apps seem to have replaced pacifiers and comfort blankets in public places such as restaurants, airplanes and subways.

Major Web portals and private companies also jumped on the bandwagon by providing free apps for toddlers as a way to market their brands and products. High-quality animation and coloring apps targeting young iPad users are ubiquitous in the Apple App Store.

Experts say using these digital gadgets at such a young age might cause attention deficit disorders, but few parents are sure how much is too much, and whether the benefits outweigh the potential long-term costs.

Shim Kyung-ran, a child development expert, said that all apps for children should be deleted if parents have kids who are younger than 7 years old.

“Never allow your kids to play with your smartphone if you don’t think they are able to control themselves,” said Shim, who runs a private institute for child development in Gangseo District, western Seoul. “Even if the children understand the rules regarding their use of the digital gadgets, don’t be so hard on them.

“Instead of taking the iPad away from your children, encourage replacing the device with other things such as a pet or other popular toys,” Shim added.