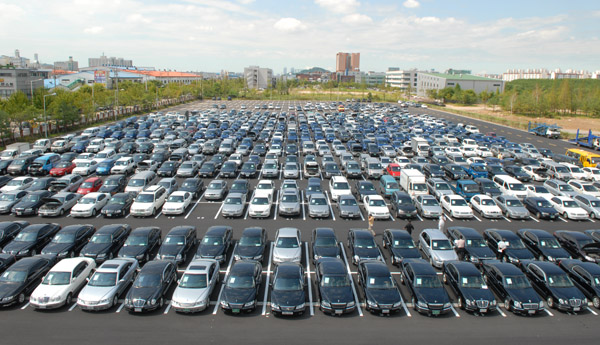 Used cars await prospective buyers at a parking lot recently. Exports of secondhand Korean cars have been rising in the region due to the growing popularity and reliability of Korean vehicles. [JoongAng Ilbo]


Exports of used cars are growing in tandem with the rising popularity of and confidence in Korean vehicles overseas, as consumers turn to Web sites like Autowini.com or participate in local used car auctions, among other routes.

The number dropped in 2009 and 2010 because Russia raised its import tariffs and Iraq temporarily suspended imports, according to SK Encar.

“Demand is increasing as new cars made by local automakers are becoming popular abroad,” said Choi Mun-suk, an executive at SK Encar, which runs the Autowini.com site.

“Korean cars are well-made but relatively cheap. Customers in developed countries such as the United States and Britain purchase components [for cars they already have], whereas those in developing countries tend to buy secondhand sedans, sport utility vehicles and buses.”

Any company can trade their vehicles on the site, and there are more than a few Toyotas, Hondas and Nissans being sold there to developing countries.

“Japan’s market is not as open as the one represented by Autowini.com,” said Yim Min-gyeong, a spokeswoman for SK Encar.

The company started exporting used cars from Korea in 2006.

It delivered 84 vehicles to countries including Thailand that year but saw the number jump to 3,639 in 2011.

Hyundai Glovis, a logistics arm of Hyundai Motor, has an offline auction center in Bundang, Gyeonggi, where many foreign buyers head to bid for used cars.

The company also operates two auction markets: one in Sihwa, Gyeonggi, and another in Yangsan, South Gyeongsang.

But the biggest foreign buyer in terms of total value is Russia, where motorists treasure the Hyundai Starex minivan.

“Four-wheel drive SUVs are popular there due to the cold weather,” said Yi Ki-young, a director at the Korea Used Car Export Association.

“Now Russia is buying over 4,000 used cars each month. Exports to Libya are also doing well.”

Meanwhile, city cars like Kia Motors’ Morning are well-received in Vietnam, according to SK Encar.

The second-largest buyer is Jordan. Even though it ranked second in terms of the value of used cars purchased, the Middle Eastern country was the biggest buyer in terms of the number of units, snapping up 92,450 in 2011 to account for around one-third of those exported.

It has topped other countries for four consecutive years. Many of the vehicles delivered to Jordan are sold on to neighboring countries and regions such as Saudi Arabia, Iraq, Libya and Palestine.

“Domestic cars have a high rate of fuel efficiency and are competitively priced, which is why they are popular in Jordan,” a Kotra spokesman said.

Seventy percent of them said they would buy more used cars from Korea.

“With growing exports of used cars to Jordan, the delivery of automotive parts such as tires and batteries is also rising,” said Cho Ki-chang, head of Kotra’s Jordan office.