China signs on to a UN chastising of North

China signs on to a UN chastising of North 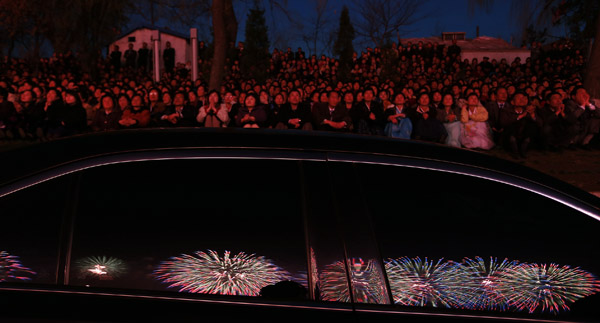 North Koreans watch fireworks in Pyongyang in celebration of the 100th anniversary of the birth of North Korean founder Kim Il Sung Sunday night. The colorful display is seen reflected in the window of a limousine before a crowd of people. It’s said that North Korea spent about 10 million dollars for the fireworks. [AP/YONHAP]

Kyodo News Agency reported yesterday that it obtained the draft of the statement that “strongly condemns” Friday’s launch as an apparent breach of UN Security Council Resolutions 1718 and 1874 that bans “any launch using ballistic missile technology.”

The two core members of the council, the United States and China, agreed on a nonbinding, presidential statement, which needs approval from all 15 Security Council members to be adopted, Kyodo News said.

The UN Security Council members yesterday held a second emergency meeting at which, sources said, the presidential statement would be adopted.

“The Security Council members have actively made behind-the-scenes contacts and nearly reached a decision to adopt a presidential statement,” a UN diplomatic source told the JoongAng Ilbo yesterday.

“The upcoming presidential statement focuses on deploring North Korea’s military provocations and issuing preemptive warnings on a third nuclear test by the regime,” a South Korean government official told reporters yesterday. “In particular, if the North uses highly enriched uranium fuel for the test, strong sanctions against the regime will be imposed.”

Many analysts expect North Korea to make a third test of a nuclear device, as it did before after missile launches.