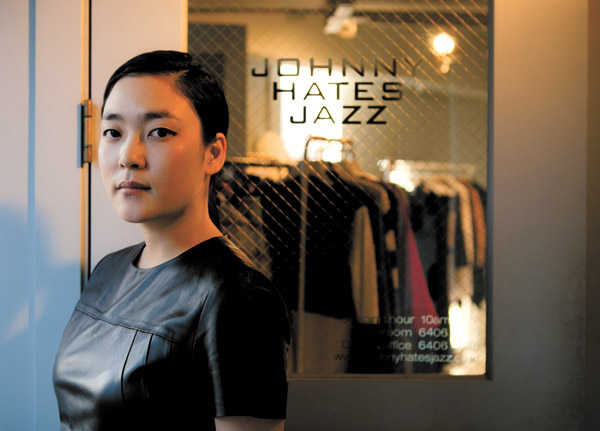 Even with so many new brands popping up in the local fashion scene, it is difficult to find a designer who knows how to tread the delicate line between the artistic and the commercial when it comes to clothing for women.

But Choi Ji-hyung, the head designer for hip label Johnny Hates Jazz, is an outlier. She makes wearable clothing that winks at the artistic without being prosaic or unapproachable. Since its launch in 2007, the label has been gaining a reputation as the go-to brand for “it” girls in Seoul.

Her witty clothing includes popular items like perforated leather skirts and tailored women’s trousers with elastic waistbands. The designer said her knack for balancing the experimental and marketable comes from her experience as an assistant designer at Vivienne Westwood after she graduated from the London College of Fashion in 2004.

In six years, Johnny Hates Jazz has grown fast, with copycat designs of its clothing seen throughout the country. Choi said that she even saw a copy of one of her designs hanging in a clothing shop in the same building as the Johnny Hates Jazz office in trendy Sinsa-dong, southern Seoul.

Along with the label’s popularity, Choi has been landing numerous design projects from all sorts of companies. Both NHN, which operates the nation’s No. 1 search engine Naver, and cosmetics company AmorePacific have asked her to design their employee uniforms. And this March, she launched a clothing line, The Johnny Love, on a home shopping network in collaboration with CJ Home Shopping.

This month, Choi wrapped up her Fall/Winter 2012 show at Seoul Fashion Week under the title “Neo Bandidas,” after the designer’s main source of inspiration: the 2006 Western film “Bandidas.” Using materials including tartan wool, leather, fur and silk, Choi said she tried to create her own version of modern clothing with a hint of clothing seen in the Wild West.

The designer said that her mother had a big influence in her becoming a fashion designer.

“My mother had a lot of affection and respect for the art of making clothing,” said Choi, adding that her mother used to dress her up in baby clothes by designer Jin Tae-ok. Choi said that she was so grateful when Jin came to her wedding and congratulated her on her big day.

“Before the wedding, I sent Jin Tae-ok pictures of myself wearing her clothes when I was a child. Those clothes were the foundation of my design life and made me start dreaming of working in this industry,” she said.

Her wedding dress was made by her friend, fashion designer Kim Jong-su, whom she befriended while studying in the U.K. Choi said that Kim, who worked for designer Jean Paul Gaultier for six years, is a designer that is aesthetically very different from her. Because their styles differ so much, she said Kim pushed her to experiment.

The JoongAng Sunday talked to Choi earlier this month after her successful show during fashion week and discussed her design philosophy, her collaboration with a big conglomerate and the creation of her wedding dress.


Q. The theme of your collection at Seoul Fashion Week was inspired by the Western film “Bandidas.” What was the concept you were going for?

A. When we think of Westerns, there is a stereotypical image in our heads, whether it’s the vast and untamed landscape or iconic shooting scenes ... I wanted to recreate these images that are stuck in people’s minds but in a modern way. I enjoy working on collections with themes that are unique with strong images.

For the average consumer, designers’ explanations of the meaning behind their clothing can feel too abstract, and their fashion shows too far from reality.

I think people want some sort of fantasy, whether small or big, when they try on clothing. Even with a simple T-shirt, they want to change their image.

A designer’s show is a stage where these fantasies are maximized, where people can see clothing that they have imagined or fantasized about. But I also want to make clothes that people can actually wear, clothing that they can keep in their closets for a long time. In the end, I try to balance this dream and reality when I design. 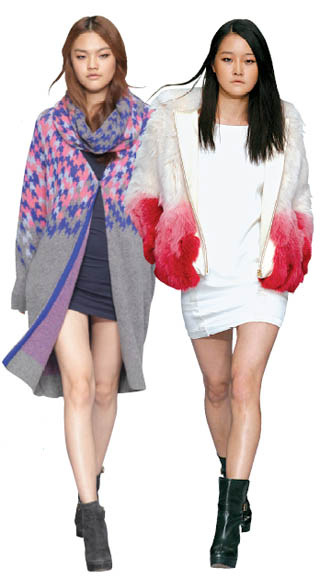 Is there a harmonious ratio for balancing this dream and reality?

In my case, I try to put just enough wit into my clothing designs to make people go “Ah!” In my collections, I think this kind of wit makes up 30 percent of my designs because you want to excite your customers and keep them fantasizing.

Home shopping is not considered high-end. Did you worry about your brand name when you launched the home shopping label?

Nowadays, you can even see imported cars being sold on home shopping channels. Home shopping is just another very big retail channel. I found it fascinating to think about the potential of this big market and what people want from home shopping labels. Clothing differs depending on who you are targeting. The Johnny Love has its roots in Johnny Hates Jazz, but it is a more commercial line.

How has it been for a relatively small-scale designer brand to collaborate with a large conglomerate?

CJ is a conglomerate that has retail channels and networks. Fashion can’t survive without proper marketing and public relations. I wanted to use the strengths that a large conglomerate like CJ has to promote my designs.

The influence of large conglomerates is growing, even in the creative fashion world. Last year, designer Kim Jae-hyun of the label Jardin de Chouette was in the news when the brand was bought by Kolon.

In the beginning, a brand can launch and operate only with the designer’s creativity and passion. However, when it starts to grow, it needs a partner, whether it is a great marketer or investor. The future of the brand depends on when it can find a good partner. Johnny Hates Jazz is not a brand that tries to cater to a very small, high-end clientele. If the brand doesn’t grow in size, it can’t last very long. If I can find a partner with finances and good retail channels and I can stay on as creative director, I think that is a great example of how a label should grow.

Aren’t you worried that if a big conglomerate with financial power gets involved, the integrity of the designs might be compromised? 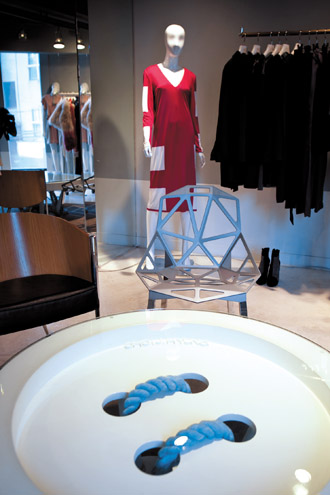 There are points when you have to compromise in order to partner up with a big conglomerate. But also, there are certainly things that you need to keep. It would be unfortunate if a brand all of a sudden loses its color. Even if the items don’t sell fast, the partner needs to wait for it to come along and it needs to be considerate of the brand’s original customers so that they don’t feel betrayed or confused.

How are your uniform projects coming along?

I think with the uniform projects, I actually managed to break my own mold as a designer because I needed to design with a clear intention. The NHN uniform I designed is worn by employees who usually work outside the office, including information desk clerks, parking lot and security employees and cleaners. I was able to meet a diverse group of people through these uniform design projects. It was a really interesting project for me, to come up with a creative way to dress cleaners and parking lot employees.

Your wedding dress was made by a friend?

Yes. My friend and designer Kim Jong-su made the dress. He studied art and is very creative and very different from me, so he pushes me in a lot of ways. I was so thankful when he said he would design my wedding dress and give it to me as a present .?.?. We ended up choosing a mermaid line, tube top dress design and we even sat together and put all the beads on the dress. The reception dress I wore was also designed by a friend who has worked at the Milano-based brand Antonio Marras for a long time. I felt very special wearing dresses like these on my wedding day.

What does clothing mean to you?