Education chief gets 1 year in jail

Education chief gets 1 year in jail 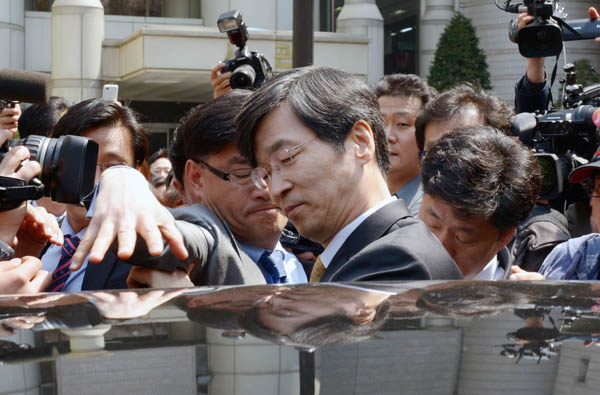 Kwak No-hyun, center, superintendent of the Seoul Metropolitan Office of Education, getting into his car yesterday at the Seoul High Court in Seocho, southern Seoul, after an appeals court sentenced him to a one-year jail term. [YONHAP]


Seoul Education Chief Kwak No-hyun received a one-year jail sentence for bribing a rival to drop out of the election for his position - but the Seoul High Court delayed his prison time until the Supreme Court upholds its ruling.

The Seoul High Court yesterday rejected a ruling in a January trial which found Kwak guilty and fined him 30 million won ($26,322), saying it was too light.

The 58 year-old superintendent was found guilty of giving 200 million won to Park Myong-gee, a professor at Seoul National University of Education and a liberal candidate in the election for the superintendent of the Seoul Metropolitan Office of Education in June 2010. Park abandoned his candidacy and Kwak won. Prosecutors said it was a simple bribe, while Kwak says he gave Park the money as a “goodwill gesture” after he heard Park would drop out of a campaign on which he had spent so much money.

At the first trial in January, the court convicted Kwak of bribery and violation of the Local Education Autonomy Act and the Public Official Election Act, fined him 30 million won, and released him from months of custody. That could have cost him his job: Under election law, if the Supreme Court upholds a ruling that fines an elected government official more than 1 million won, the election becomes invalid and the official loses his or her job.

The appeals court yesterday said the January ruling was too light.

“200 million won is such a large sum of money, considering previous election bribery cases,” the court said. “We also decided that the superintendent gave the money in exchange for the rival’s exit for his own personal purposes, so the first sentence is too light.”

As the court didn’t arrest Kwak until a final ruling, he can hold onto his job. He will lose it if he goes to jail.

“I can’t accept the ruling,” Kwak told reporters yesterday. “Ultimately, truth and justice will be revealed and I will do my best to reveal the truth at the Supreme Court and the Constitutional Court.”

Contrary to the ruling for Kwak, the appeal court lightened the court’s punishment of Park Myong-gee, who accepted Kwak’s money, saying it was too harsh. Park yesterday was sentenced to 18 months in jail and a fine of 200 million won. The lower court sentenced him to three years in jail.

“Although Park should be given a grave punishment, he reduced the amount he asked of Kwak from 700 million won to 300 million won, and he dedicated himself to the development of Korean education for 12 years,” the court said. “In this sense, the first sentence is too heavy.”

Kang Kyung-seon, a law professor at Korea National Open University and Kwak’s best friend ? who played the role of go-between and delivered the money from Kwak to Park - was fined 20 million won, the same as in January.

Protesting the conviction of Kwak, who is a liberal icon in Korean education circles, his supporters released a joint statement.

“Superintendent Kwak is innocent,” the statement said. “He should continue in his job until the Constitutional Court reveals the actual truth.

“The court has admitted the fact that Kwak gave the money out of goodwill, but convicted him, surrendering to the power of the conservatives,” they said in the statement.

However, the Korean Federation of Teachers’ Association, known as an association of conservative teachers, demanded Kwak step down.

“[We only ask] that he resign from the superintendent position because he forfeited his ethics,” said Kim Dong-seok, a spokesman of the federation.