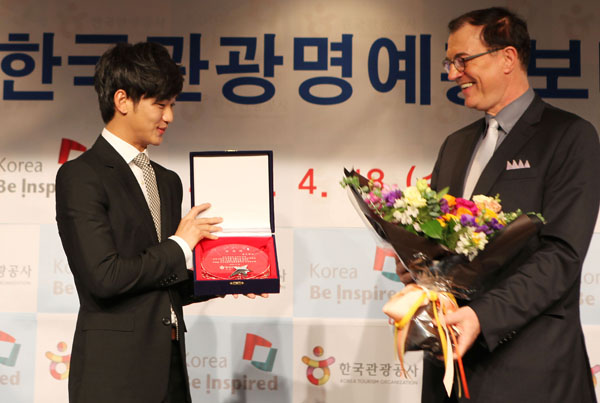 One of Korea’s most popular actors of the moment, Kim Soo-hyun, has been picked to be the face of the Korea Tourism Organization.

Yesterday, Kim was inaugurated as an honorary ambassador at the Korea Tourism Organization headquarters in Jung District, central Seoul.

“Korea has so many diverse regions, and I believe that there is a place within Korea to suit all tastes,” summed up the bashful young actor at the ceremony, where female fans had gathered en masse to catch a glimpse of him as he stopped by between commitments. “I’ll certainly do my best to encourage visits to Korea.”

The CEO of the Korea Tourism Organization said that Kim’s international appeal made him the perfect tourism representative for the country.

“Kim Soo-hyun became a prominent Hallyu actor through starring in the drama ‘The Moon Embracing the Sun,’ which was exported to seven nations in Asia from Japan to Singapore. In China too, the show exceeded 100 million views through the Internet,” he said.