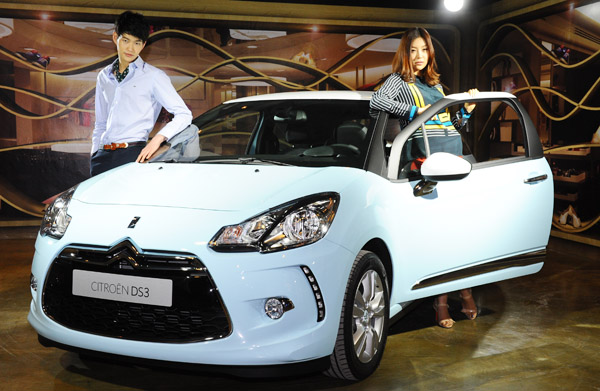 Citroen introduces the DS3 hatchback at Inter Wired Studio in southern Seoul yesterday as the French brand makes a comeback to the Korean market. The DS3 comes with a 1.6-liter VTi engine or a 1.4-liter e-HDi diesel engine. [NEWSIS]


French automaker Citroen, a sister brand of Peugeot, made a comeback to the Korean market yesterday following its withdrawal in 2002. Citroen intends to target younger customers with competitively-priced premium models.

After a decade away, Citroen launched a new diesel hatchback DS3 at a price below 30 million won ($26,370). The DS3 is the most reasonably-priced model among European cars sold in the country.

“The sales of imported cars grew to over 100,000 cars for the first time last year but it expanded only quantitatively, with a large portion of the market dominated by certain brands,” said S.C. Song, president of Hanbul Motors, the official distributor of Citroen and Peugeot vehicles in Korea.

Song said German brands such as BMW and Mercedes-Benz control over 60 percent of the market.

“People in their 40s and 50s were the main buyers of imported cars in the past, but those in their 20s and 30s will be the future,” he added.

Hanbul said it already set up national dealerships to distribute Citroens. Two dealers opened in Seoul yesterday while four more outlets will be opened in the country by the end of this year. Hanbul hopes sell a total of 1,500 Citroen cars this year.

Jean-Yves Dossal, director of sales for PSA Peugeot Citroen’s Asian operations, said it would launch bigger models shortly, starting with the DS4 in a few weeks and the DS5 by the end of the year.

Citroen, which is known for its innovative and futuristic designs, is a part of PSA Peugeot Citroen S.A., the second-biggest automaker in Europe. It led innovation in the automobile industry in the early 20th century.