South shows off missiles of its own

South shows off missiles of its own 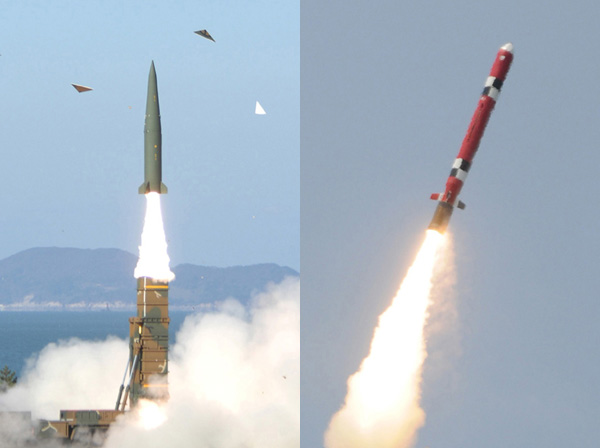 The Ministry of National Defense yesterday showed a video clip of the two latest weapons to reporters for the first time - a long-range cruise missile and a ballistic missile.

“The military has independently developed and deployed this cruise missile, which is equipped with the world’s best capability for attacking a target in North Korea from anywhere it is fired,” Shin Won-sik, a Defense Ministry official, told reporters.

“This cruise missile can attack a target as small as a window located hundreds of kilometers away,” Shin said. “We can attack any military target precisely, including North Korea’s facilities, soldiers or equipment.”

In the footage, the cruise missile blasted off from the launch pad and flew toward a building-shaped target, striking the roof. Although the ministry didn’t offer details of the exact profile of the weapon, experts say it has an estimated range of at least 1,000 kilometers (621 miles).

The ballistic missile was also shown in the clip. It flew up and then exploded in midair, attacking targets on the surface. The ministry said the weapon could devastate a region as large as several soccer fields and fly up to a range of 300 kilometers.

Tensions ran so high on Wednesday that North Korea lambasted a demonstration staged by South Korean citizens lampooning new leader Kim Jong-un, saying it will “blow up the whole city of Seoul.”

“While we are celebrating the centenary of founder Kim Il Sung’s birth, the traitor Lee Myung-bak and his group is pouring water on our festive atmosphere and committing evil acts and extreme madness,” the statement said. “They let the traitors of the Korea Parent Foundation and the gangsters attending universities commit acts like bastards in several places, including Gwanghwamun Plaza in Seoul.”

The Korea Parent Foundation, known as a conservative civic group protesting against pro-North supporters in the South, held a press conference on April 13 in Gwanghwamun Plaza, after the regime fired the long-range rocket. Condemning the liftoff, the foundation members displayed a mock-up rocket with a doll of heir Kim Jong-un attached to it and burned a photo of the new leader on the spot.

“Although it’s the heart of Seoul, it is becoming the center of provoking us and slandering our dignity,” the North said in the statement. “A special action measure will be taken to blow up all of the things in Seoul.”