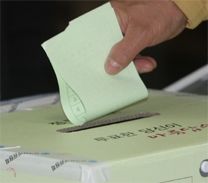 The Unified Progressive Party, which won 13 seats in the National Assembly last week, including six proportional representatives, has been accused of rigging the party’s proportional primary.

From March 14 to 18, the UPP held a primary to elect proportional candidates ahead of the April 11 general election.

All party members can vote in three ways: in person at a polling station, via the party’s Web site, or through a unique mobile phone canvassing method. If more than 30 party members asked for a ballot box, a party official carried a box to one location and the votes were done there.

The system, which was aimed to help voters who couldn’t get to polling stations, was allegedly abused, sources said.

Lee Cheong-ho, a party member and an incumbent representative from Busan, posted a message on the party’s Web site under the title “Condemning the Rigged Primary”.

Lee said in the post that “everyone knows” that voting through the mobile ballot box “was a mess.”

“There was only one official who controlled and delivered the mobile ballot box and he was moving all around, literally, to collect votes,” he said. “As a local campaign manager of the party, I didn’t even know the existence of the system at all.”

Lee suspects that people who used that voting method were supporters of certain candidates, who accrued many votes that way.

Lee also said that the company that managed the ballot counting has been in a close relationship with the Democratic Labor Party, which was absorbed into the UPP.

Another UPP official told the JoongAng Ilbo on the condition of anonymity that the management of the voting at polling stations was shoddy.

“Even after the election finished, the local election committees of the party didn’t send the ballots to the central committee, so an election manager reported a tentative outcome,” he said. “No one knew whether the local committees rigged the votes or not.”

The party earned six proportional representatives in last week’s general election. Lee demanded two of them step down, including Yoon Geum-soon, who got the most votes, and Lee Seok-gi, who got the second most.

The UPP consists of members with three different political ideologies: some from the so-called National Liberalization (NL), a pro-North Korea group that saw its acme during the democratization movement in the 1980s; former members of the People’s Participation Party; and people from the so-called People’s Democracy, who are labor activists but critical of the North Korean regime.

Suspicion is rising that the rigging was done by the NL group, who have been said to control the party from behind-the-scenes.

“By the end of next week, we will thoroughly determine the truth,” Wu Wi-yeong, spokesman of the UPP, said.