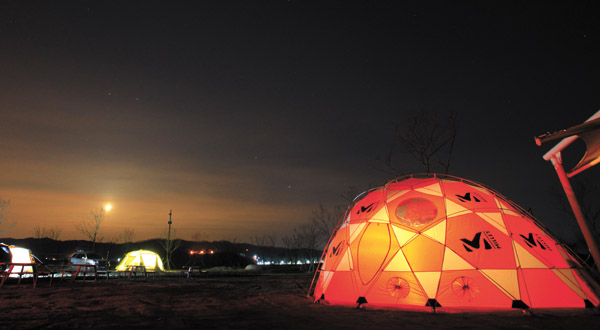 When the sun goes down, it’s story time at the nation’s campsites. Here, lanterns illuminate families’ tents as they get together over barbecued meals. [JoongAng Ilbo]


At a campground in Gyeonggi last month, 100 families packed together, their accommodations blanketing the area. The recently opened venue was dotted with tents, campers and RVs where people could eat and sleep. Huge tunnel tents offered slightly less luxurious shelter to families, and singles settled down in one-person tents.

This scene at the Yibopo Auto Campsite would have been almost unheard of in Korea just a few years ago, with camping considered a pastime for the wealthy few who could afford the posh equipment it came to require. But in recent years, the number of campers in Korea has exploded, fundamentally changing the perception of the activity as it opens up to everyday people.

The nation’s camping population is estimated to be around one million this year, a five-fold increase over the previous two or three years, according to industry insiders. Today, there are four Internet communities for campers to join and share information, each with between 100,000 and 200,000 members.

This growing market has attracted the attention of global camping equipment companies eager to cash in on the rapidly growing market here. The event in Gyeonggi, for instance, was organized by outdoor clothing and equipment brand Millet Korea.

“Korea is probably the only country that enjoys camping when it rains or snows,” said Richard Guilfoile, the president of Coleman Asia-Pacific, another camping brand. “The United States and Japan have longer histories when it comes to camping compared to Korea, but Koreans’ passion [for camping] is second to none.” 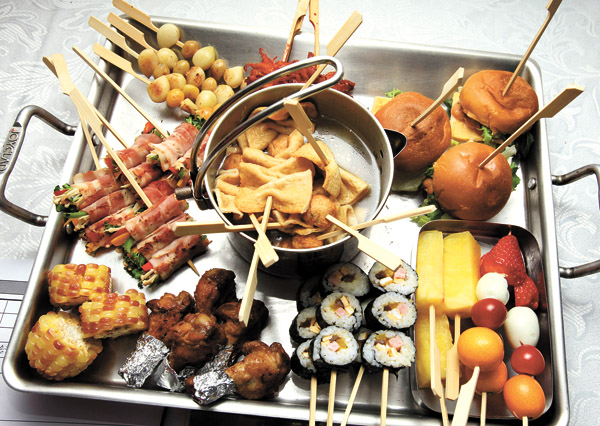 As camping grows in popularity, meals other than samgyeopsal (pork belly) make their way onto grills at campsites.

There are about 500 camping sites in Korea and those within arboretums are highly preferred by the newest participants of the pastime. Outdoor sites that include sports facilities such as miniature golf courses are also popular.

As the popularity of camping increases, so does profit for companies who produce basic camping necessities. Winter camping has been a boon for local makers of kerosene heaters, which have seen their domestic sales shrink as the country adopts more advanced heating systems.

But just as these companies have begun to adopt more export-based operations, the demand for kerosene heaters at home jumped up as more campers began using them to heat their tents. Some companies even needed to reimport heaters that they had shipped abroad for sale overseas.

Today’s consumers aren’t quite the same as those who were the mainstay for camping equipment companies in the past, though. As more and more average citizens take up the activity, veterans are recommending that newbies start with less expensive or secondhand equipment, increasing demand for these materials.

Except for kitchen tools, veterans say it takes time to get a good grip on how to properly use camping equipment, especially tents, and that flashy and expensive tools are not for everyone.

Large and high-end camping gear from Coleman and SnowPeak used to dominate the market a couple of years ago, but now the types of tents used at campsites are much more varied.

Seeing this new opening in the market, companies like Millet have begun organizing camping events and festivals to educate new consumers, providing information about the various products they offer for sale.

“Everyone starts camping by imitating other campers in the beginning, and they come to enjoy camping with their families,” said Bang Min-ho, who’s been camping for eight years. “And then there comes a phase when they feel bored with similar camping patterns. I recommend these kinds of camping events for those who want to perk up their camping routines.” 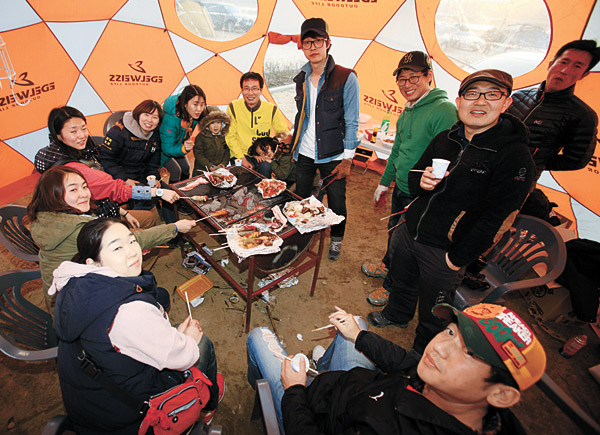 Campers gather in a tent to enjoy dinner.

Last month’s Millet-sponsored event consisted of many different activities that campers could take with them on their next trips.

During the day, families came up with their own recipes that could be easily enjoyed at camping sites and entered them into a friendly competition.

The first-place prize went to the family of Park Wu-sik, who prepared a scotch fillet steak that was first boiled and then skewered and grilled over a charcoal fire. Greens that are only available in the spring, such as wild chives, added a sophisticated flare to the dish as a garnish.

Like many Korean men, Park hardly visits the kitchen at home, but he becomes a different person when he leaves for a camping trip with his family.

“The children are watching me. I have to cook and prepare the dishes well,” Park said with a grin on his face.

After the cooking competition, campers prepared dinners by themselves, mostly on charcoal barbecues like the one Park used. After emptying their dinner plates, another staple in Korean camping was put onto the fire: sweet potatoes wrapped up in shiny aluminum foil.

“The most exciting part of camping for me is nibbling sweet potatoes with my younger brother,” said 10-year-old Bang Eun-ji, who was at the event with his family. 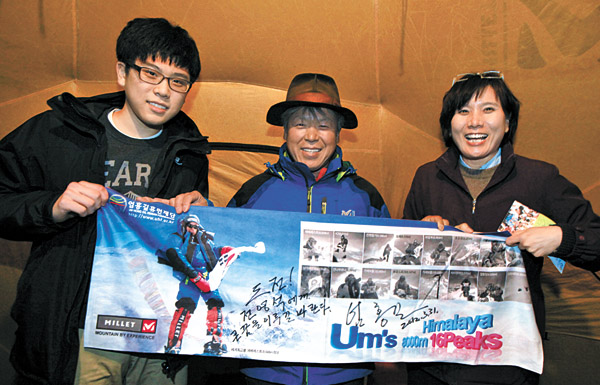 
As the sun went down, the flickering lights from lanterns began to illuminate the tents one by one, setting the mood for storytelling. That’s when mountaineer Um Hong-gil started talking.

As a paid endorser of Millet Korea, Um, who has some of world’s tallest mountains under his belt, drummed up excitement for camping among the attendees.

Speaking to the crowd, he shared some of the many adventurous moments he has experienced while venturing to climb some of the toughest mountains in existence, from Mount Everest, the world’s highest, and K2, the second highest.

When Um discussed losing some of his fellow mountaineers, young campers began to sob. Um’s eyes filled with sudden tears when he recalled the moment he broke his ankle while climbing Annapurna in the Himalayas.

Although the scenes described by Um and that at the Yibopo Auto Campsite couldn’t have been more different, the veteran climber did his job - drawing in his audience and focusing their attention on the excitement of camping.

Though he’s conquered more serious terrain than his audiences will likely ever see in their lifetimes, he’s a successful guru of sorts, using his 24 years of camping and hiking experience to reach out to Korea’s new campers.

He’s likely to be especially popular with the more serious outdoor types, who have started camping in recent years. 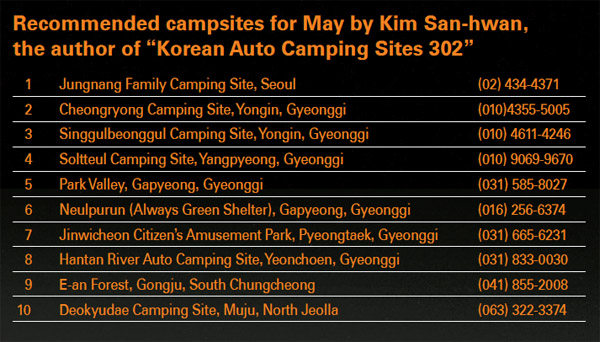 
For instance, some experienced campers now choose backpacking instead of settling down at preselected camping sites, which are often crowded with families who are out for a different kind of experience.

These backpackers walk until they find suitable and tranquil places to set up camp. The so-called “Indian tents” often used by these backpacking campers weigh about two kilograms (4.4 pounds) and cost about 100,000 won ($87.8).

“Backpack camping costs about half of ordinary camping, and it also promotes self-esteem for your children because they have to carry their own backpacks,” said Sohn Han-seok, who runs a camping community called Snopy.

Going on a backpacking trip has become a monthly ritual for Lee Jung-hwa, a 37-year-old office worker.

She fills her backpack with camping gear such as a tent and camp stove before hitting the road. Since national parks do not allow camping and cooking, she often goes to small islands around Incheon.

“Most islands have mountains. I walk up to six hours from the landing place to a mountain and then set up my tent when I find a suitable, flat place,” she explained.

“If you head to the western islands of Korea, you can enjoy a beautiful sunset in the afternoon and a sunrise the next morning while sipping on a cup of coffee. I can’t ask for more than that,” Lee said.

A similar sense of anticipation likely came over Um’s crowd as he described in detail his favorite parts of camping.

“After tossing around in the tent all night, watching the sun come up is one of the most grateful moments at the Himalayas,” Um said.

And that’s just what he was hired to do.