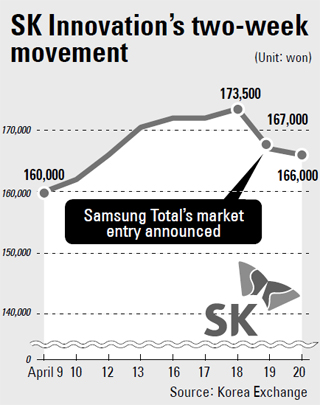 On Thursday, the government announced that Samsung Total Petrochemical will become the nation’s fifth domestic petroleum provider in June. This was a move designed to boost competition and lower gas prices by breaking the oligopolistic hold of Korea’s four domestic oil refiners - SK Innovation, S-Oil, GS Caltex and Hyundai Oilbank.

Such developments mirror the dominant view among analysts that Samsung Total’s entry into the market will hardly leave a dent in other refiners’ performances.

“Even when you add up all the gasoline that Samsung Total makes and sources to both domestic and foreign markets, it only amounts to 0.14 percent of the total domestic market,” said Oh Seung-kyu, analyst at Solomon Investment & Securities. “The impact [of Samsung Total’s market entry] to local refiners’ fundamentals will be negligible.”

“The drop in oil sector stocks seen [on Thursday] was a psychological reaction,” said Kim Sun-woo, analyst at Woori Investment & Securities. “The size of the drop was excessive.”

Samsung Total has said that it will not be distributing petroleum products by operating gas stations, but just providing fuel to so-called “thrift” gas stations, or non-branded gas stations being pushed by the government that offer cheaper prices.

“Because Samsung Total’s share in the domestic market is so small, it will not only fail to affect refiners’ performances but it will also be difficult to revamp competition in oil distribution and lead to a drop in oil prices,” said an oil sector analyst from a brokerage house.