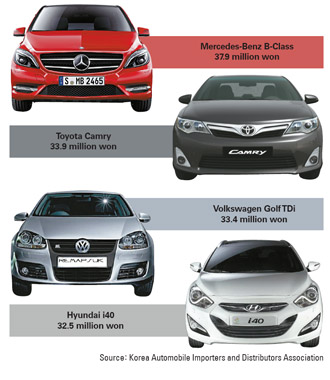 The market for new cars priced between 30 million won ($26,318) and 40 million won is heating up as more domestic and foreign vehicles are being released in that range in recent months.

To capture the public’s attention and shine a light on its low cost, Mercedes-Benz Korea is displaying its new B-Class inside a sunken square at the COEX mall in southern Seoul.

This is the first time the model, which is selling for just 37.9 million won, has been put on show to the public outside regular showrooms since it was released on April 2.

“Breaking below 40 million won has made it very appealing to the public,” said Lee Jong-min, a marketing manager at Mercedes.

Importers are lowering their prices in a bid to keep their market share - a trend helped by the Korea-U.S. free trade agreement that took effect last month - but domestic automakers are going in the opposite direction.

Importers claim they are adding more cars in this price band to respond to the changing demands of consumers increasingly stress affordability.

The most popular imported vehicle under 40 million won is the Toyota Camry midsize sedan, with 1,603 units sold here from January through March.

The seventh generation Camry costs 33.9 million won, one million won cheaper than its predecessor. This was made possible because Toyota Korea is shipping it from the United States instead of Japan to capitalize on the Korea-U.S. FTA. It is manufactured at a plant in Kentucky.

“No matter how good the car is, it won’t sell here unless it’s competitively priced,” said a Toyota Korea official.

Citroen, a sister brand of Peugeot, also introduced its DS3 hatchback on Thursday for between 28.9 million won and 29.9 million won, depending on its engine type.

Some of the imported sport utility vehicles are also available for those on a similar budget. Honda’s CR-V SUV retails for 34.7 million won, while the Jeep Compass costs 34.3 million won.

However, domestic cars are bucking the trend and asking motorists to fork out more as they add options and generally become more luxurious, in effect minimizing the gap with traditionally expensive imports.

The high-end version of the new Santa Fe SUV from Hyundai Motor will sell for around 33.4 million won. Meanwhile, the carmaker’s i40 wagon with full options, also from Hyundai, is priced at 32.5 million won.

“Domestic cars are now more expensive than before and buyers are not as scared of buying imported cars priced above 30 million won,” said Gu Sang, a professor of industrial design at Hanbat National University.