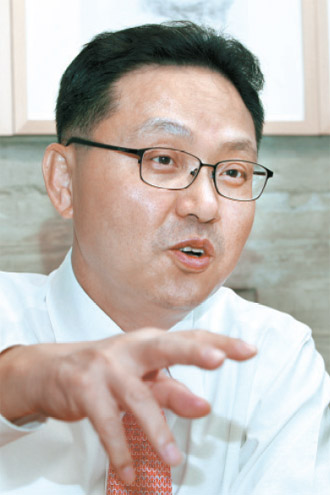 For the first time, a North Korean defector has become a member of the National Assembly, raising expectations that he will up the pressure to do more for the refugees fleeing the totalitarian state and trying to adjust to life in the South.

Cho Myung-chul, a high-profile North Korean defector who chaired the government-backed Institute for Unification Education, became a proportional representative of the ruling Saenuri Party after the April 11 legislative election.

Cho, who was a professor at Kim Il Sung University in Pyongyang, defected to the South in 1994. Of the 23,000 North Korean refugees in the South, Cho has received the highest-ranking South Korean government job.

The newly-elected lawmaker sat down with the Korea JoongAng Daily on Tuesday for an interview in Seoul, and expressed his strong wish to improve the lives and human rights of North Koreans living in both North and South Korea.

“I feel nervous because I’m the first person to enter the South Korean political arena as a North Korean defector,” Cho said. “I know everyone is watching me and expecting various things from me.”

In the South, expectations and support for the first defector-turned-lawmaker are high and strong. When Cho was accused of forging his academic records, 37 associations of North Korean defectors in the South released a series of statements proclaiming his innocence. The Unification Ministry officially explained that Cho didn’t fabricate his education profile, and blamed the controversy on a misunderstanding of the different degree systems between the two Koreas.

As the first representative of defectors, Cho said creating jobs is the top priority to improve their lives in the South.

“Getting a job is the most important thing,” he said. “There are many defectors struggling to adjust to the different lifestyle in the South. The situation is even worse for handicapped defectors.”

“If we can’t succeed in incorporating 23,000 defectors, unification with the 23 million people in the North will be much more difficult,” he stressed.

Although there is an array of career support programs for defectors, Cho said the programs should be customized to the various backgrounds of the defectors, such as gender, age and education level.

“The government should support defectors individually considering their different backgrounds, including employment, medical care services and education,” Cho said. “Conglomerates should hire them even if they are less qualified compared to South Korean workers and the government should fund companies hiring North Korean defectors.”

Despite the government’s support for North Korean defectors, they face hurdles and even discrimination in the workplace. A survey conducted by the Ministry of Unification in 2011 showed 51.2 percent of 8,685 defectors said they regard themselves as lower class and 57.7 percent said they weren’t satisfied with their lives in the South because of financial troubles. More than 45 percent said they experienced discrimination.

“I think if South Korea wants to be a developed country, we should embrace those people as a minority in our society,” Cho said.

The second task Cho has as lawmaker-elect is China’s forced repatriation of North Korean defectors. Although the Chinese government recently issued exit visas for some refugees in Korean consulates, concerns are still high that China will send other arrested refugees home.

Cho said now is the time to take a public stance on the issue, not to deal with it behind the scenes.

“If we think this is an issue of basic human rights, we should publicly criticize any forced repatriation of refugees,” Cho said.

“For the past decades, we have quietly responded to this matter and other human rights violations in North Korea, but the problems haven’t been resolved,” he said. “In dealing with North Korea, nothing is resolved through making a few demands of the regime.”

Cho said he also wants to take care of families in the South whose relatives were abducted by the North, including POWs.

“We should demand the regime figure out the whereabouts of South Korean soldiers or other civilians who were abducted to console the families,” he said.

Cho has a high-profile family background. His father was the North’s minister of construction and his mother was a statistics professor at an economic university run by the ruling Workers’ Party. He graduated from elementary, middle and high school with other children of elite government officials.

He became an economics professor at Kim Il Sung University in 1987 and went to China on an exchange with Nankai University. There, in 1994, he defected into the South alone. He’s still single here.

Thanks to his background, Cho has in-depth knowledge of North Korea’s politics.

“I think the North Korean government is losing its control compared with earlier times,” Cho said. “The new leadership is relying on the offspring of people who were loyal to founder Kim Il Sung, apparently because they don’t have any fresh blood, which is the crisis of the regime.

“Although there are some new faces in the state-run institutes, they can’t enter the inner circle because of their unqualified family back-grounds,” he said.

Another proof of a crisis in North Korea’s politics is the regime’s official songun, or military-first policy.

“The fact that North Korea is sticking to its military-first policy also shows that they are at the brink of a political crisis, because it means they are scared [by an unstable political situation],” Cho said. “They seem to be in a desperate situation.”

Cho said chances of economic reform under the new leadership are low.

“Opening the economy and reforming its system are not just about allowing foreign companies to build factories or starting a special economic zone,” he said.

“For North Korea, it means a fundamental change of the economic system into privatization of assets and trade. It’s too early to see that yet.”

Cho said the first thing North Korea should do is “give up its nuclear weapons program under consistent pressure from the international community, including China.”

As former president of the Institute for Unification Education under the Ministry of Unification, Cho said the younger generation is losing interest in the unification of the two Koreas.