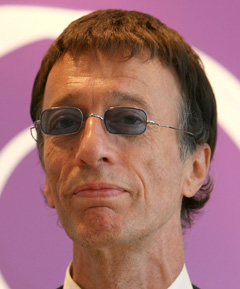 LONDON - The doctor of Bee Gees singer Robin Gibb has hailed his “quite incredible” recovery, a day after the star woke from a coma and responded to members of his family.

Gibb, 62, contracted pneumonia and fell into a coma last week. He is currently suffering from colon and liver cancer.

Doctor Andrew Thillainayagam, at the Imperial College Healthcare, said he had warned Gibb’s wife Dwina, as well as his son Robin John and brother Barry, to expect the worst.

“The prognosis was very grave, given that Robin had brain swelling from liver failure, a severe pneumonia and a weakened immune system from malnutrition,” the doctor said in a statement.

“We felt it was very likely that Robin would succumb to what seemed to be insurmountable obstacles to any form of meaningful recovery,” he added.

“As a team, we were all concerned that we might be approaching the realms of futility. It is testament to Robin’s extraordinary courage, iron will and deep reserves of physical strength that he has overcome quite incredible odds to get where he is now.”

Gibb is now fully conscious, lucid and able to speak to loved ones gathered by his hospital bed in west London.

Dr. Thillainayagam warned that the road ahead remained uncertain but said it was “a privilege to look after such an extraordinary human being”.

Earlier, Dwina Gibb said that the singer’s brother, fellow Bee Gee Barry Gibb, had been singing to Robin to try to rouse him. Robin’s three children had also been playing music to him, she said.

The Bee Gees - twins Robin and the late Maurice Gibb and their elder brother Barry, 65 - are among the biggest-selling groups of all time.