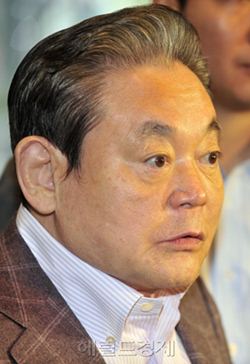 “I was deeply embarrassed by Kun-hee’s childish remarks and am worried about Samsung’s future,” said Lee Maeng-hee, the first son of the late Samsung founder Lee Byung-chull, in a statement released by the Hwawoo law firm. “He has been causing disharmony among siblings, always being greedy.”

Maeng-hee asserted that Kun-hee had been hiding inherited shares under other people’s names, which he said was proof of his greed.

Maeng-hee has demanded in a lawsuit in February that Kun-hee return 710 billion won ($623 million) worth of shares in Samsung Insurance and Samsung Electronics. The older brother claimed Kun-hee had the shares secretly incorporated into his assets through borrowed-name accounts.

“I sued Kun-hee, not because I want to get Samsung back, but to correct wrongdoing by uncovering the truth,” the 81-year-old said.

Lee Sook-hee, the fourth child and second daughter of the founder, joined her brother’s public campaign, releasing a statement through the same law firm. “When I heard Chairman Lee refer to us as ‘uncivilized people below common standards,’ I was infuriated,” she said in the release. “I haven’t received a single penny of the inherited property, and I never agreed to let Kun-hee manage the hidden shares because I didn’t know about it at all. I just want my shares, not his, which the chairman has been hiding for the past 25 years.”

Their statements followed an impromptu interview Chairman Lee Kun-hee gave to the press on the way to his office last week, his first public statement about the inheritance dispute.

Meanwhile, CJ, run by Chairman Lee Jay-hyun, the only son of Lee Maeng-hee, has decided to stop using a Samsung subsidiary as its security service contractor and appoint a foreign company.

An official at the food conglomerate confirmed Friday the group’s decision to sign a new contract with U.S.-based ADT Caps to guard Chairman Jay-hyun’s residence in Jangchung-dong, central Seoul, and his offices in Namsan, Chungmuro, in central Seoul and Sangam-dong, in the western part of the capital, from next month.

“The one-year contract with Samsung’s S-tec System and S1 has expired,” the official said.

All subsidiaries of the group will have new contracts with ADT Caps when their current deals with the Samsung security units end.

CJ has renewed its contracts with the Samsung subsidiaries for the chairman’s security until recently.

It’s widely presumed that the decision is associated with the recent legal battle between CJ and Samsung over the alleged tailing of CJ chief Lee by an official at Samsung C&T.

“It seems that CJ remains suspicious of Samsung’s involvement in the tailing case, leading it to conclude it can’t trust Samsung in security work,” an anonymous industrial official said.