A new smart TV or a set-top box?

A new smart TV or a set-top box? 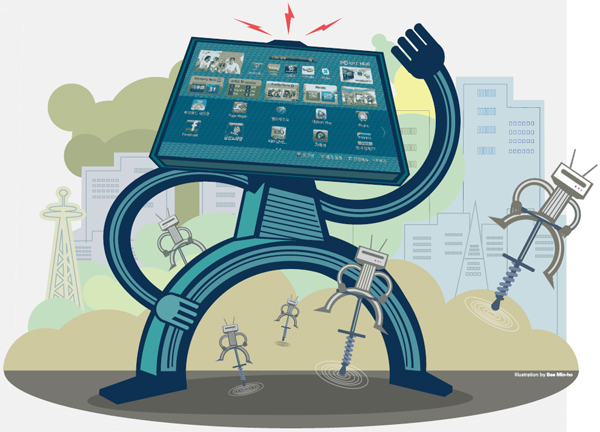 As Samsung Electronics and LG Electronics vie for leadership in terms of smart TV sales, Web portal Daum Communications has chosen to pursue a new niche market by supplying platforms for the latest highly-convergent goggle boxes.

In front of dozens of reporters from Seoul at its newly established Daum Space. 1 building in Jeju Island, the Kosdaq-listed firm unveiled on Friday its new Daum TV, an Android-based operating system for smart TVs.

Despite existing amid a fog of confusing definitions, smart TVs offer Internet connectivity without the need to link up to a separate computer. They also tend to function more like smartphones running on apps rather than regular flat-screens. Regular TVs can be upgraded using a set-top box.

Daum also introduced Daum TV+, a set-top box running on the platform. The small black box, which is just 10 cubic centimeters, will go on sale next Monday at discount chain store E-Mart for 199,000 won ($175), the company said, adding that supply channels will be expanded later.

The gadget turns a standard TV into a smart Internet-connected one. Daum stresses that nearly all regular broadcast and cable shows - except for digital content transmitted in high-definition - will be freely available the moment subscribers connect the cubic box to their TV.

At present, most households must pay monthly subscription fees of at least 10,000 won for either cable TV or the Internet protocol television (IPTV) service. The new set-top box would make this unnecessary, effectively paying for itself within a year and a half.

It does not provide access to video on demand (VOD) and other paid content, but the company is discussing ways of surmounting this obstacle with service providers, according to Daum CEO Choi Se-hoon.

This is the first time a local portal site has launched a smart TV operating system to serve as a bridge between TV and content. The Daum platform also enables users to watch various videos for kids and sports enthusiasts, explore the Web with the help of Daum’s search engine and use various apps as much as smartphone users do.

One of the most notable features about the software is Daum Cloud, which provides 50 gigabytes of storage for free and makes it possible for users to view photos and videos from the storage on TV - a similar mechanism between iCloud and Apple’s family of gadgets. 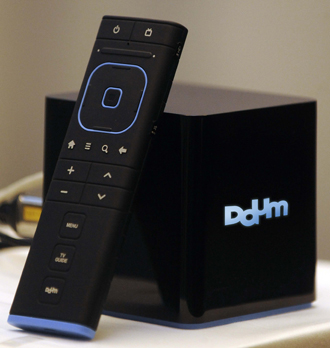 Daum TV+, a smart set-top box, is set to go on sale on Monday.

“A number of smaller TV set producers are rushing to unleash smart TVs from May,” said Choi at the press conference. “But we think anyone can make a smart TV and we are more interested in software than hardware.”

“Why shouldn’t Korean IT firms dream of creating a universal and open platform?” he said. “Should Android and iOS be the only options? It is regrettable that the only made-in-Korea operating system out there is Samsung’s Bada smartphone OS, so we want to gain a stronghold in the arena of smart TV platforms.”

Kim said Daum is willing to supply its platform to Samsung if Korea’s tech king expresses a desire to ditch its self-developed Android-powered OS and switch over.

Although Daum claims to be prioritizing its new software, the set-top box has already been magnetizing public attention after Shinsegae Vice Chairman Chung Yong-jin wrote on his Facebook account on Thursday that it is “even better than Apple’s iTV.”

Known as an early adopter, Chung may well have been leaking this teaser out of promotional intent. Nonetheless, there is a strong argument for the set-top box given its price-competitiveness over many smart TVs.

A 40-inch smart TV from Samsung with an LED screen and 3D feature costs at least 1 million won, and the latest 55-inch LED TV with the same features carries a hefty price tag of 4 million won. But if you buy Dream View TV from E-Mart, a 32-inch full HD LED TV that costs only about 400,000 won along with the Daum set-top box, it costs less than 600,000 won for you to have a smart TV set.

That may change the perception among tech-savvy Koreans that the smart TV sets from Samsung and LG are the only options for them. “The biggest merit of set-top boxes is that even if you buy a new TV, the service remains the same,” said Lim Yang-soo, head of the convergence industry research team at Digieco, a management research institute attached to KT.

In fact, cable TV service operators and mobile carriers - KT, SK Telecom and LG U+ - which operate IPTV are already bracing to cash in on the latest smart TV boom with their own set-top boxes.

That the Korea Communications Commission is scheduled to entirely shut down analog broadcasting by the end of this year and transit the system to digital is also spurring many consumers to decide between a smart TV set and a new smart set-top box enabling reception of digital content, a cheaper option.

Among cable service operators, C&M, one of the biggest in size, is seen to take the lead in the smart set-top box market. In collaboration with LG CNS, an IT convergence arm of LG, the cable firm has developed a so-called “smart set-top box” running on Android. The machine is scheduled to be placed on market shelves by the first half of this year.

LG U+ was the fastest among mobile service providers. It came up with a set-top box named Smart Seven in 2010 while KT is set to unveil its self-developed Android-powered set-top box in July at the earliest. SK Telecom is planning to commercialize a set-top box next year. IPTV is a market with a huge potential for set-top box sales; Given as of April 11, the number of subscribers has surpassed five million, only three years and four months after its launch. 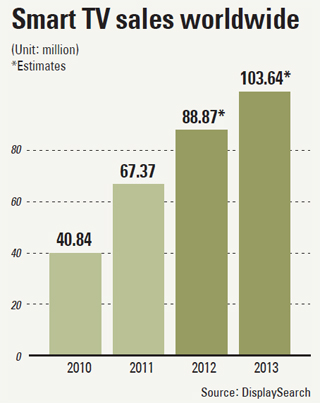 Price factors aside, smart TVs from LG and Samsung are armed with a number of cutting-edge technologies such as speech recognition and motion sensibility - features not available in set-top boxes.

“Existing mobile handset makers, the majority of whom also roll out TVs, have faltered in the aftermath of the enormous success of Apple’s iPhone,” said Cho Joon-il, researcher with the LG Economic Research Institute. “Samsung sort of caught up, but others such as Nokia, Motorola and LG have been suffering so far. And that prompted TV producers to mobilize all means to gain an upper hand in the smart TV market before others do.”

According to estimates from Digieco, some 37 percent of all TVs sold in Korea this year will be smart TVs, and the figure is expected to climb.

But even though companies are eyeing this area as a new growth engine, there remains a distinct lack of public awareness about what exactly smart TVs can do.

Kim Soo-hyun, a 28-year-old office worker in Seoul, said she recently picked up a 2 million won smart TV from Samsung but is not making use of any of its myriad of functions.

“I bought it just because I heard it was better than an ordinary TV,” she said. “But the functions seem way too complicated to understand, and I don’t have time to learn them by reading the manual. They say I can watch YouTube videos on the TV’s bigger screen, but I don’t get the point. The content from the Web site is limited and I am not really willing to splash out on paid content.”

She is not alone. Web communities are flooded with questions about how to define and use smart TVs. “It is true that the advent of smart gadgets has destroyed the value of existing products and has brought about a number of changes, but the direction these changes will head in remains hard to predict,” said researcher Lim of Digieco. “While the media tend to worship ‘smart’ technology, TV makers also seem confused over what their core value will be in the smart era, and how they need to change accordingly.”

Kim Jee-hyun at Daum said, “The future of smart TV lies in carefully observing the behavioral patterns of TV watchers - how they can best enjoy the TV and its multiple functions while leaning back.”