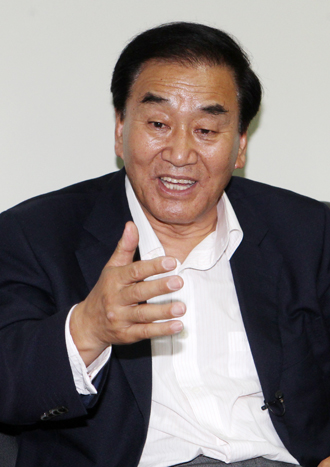 In an exclusive interview with the JoongAng Ilbo on Monday, Representative Lee Jae-oh, known as the kingmaker of President Lee Myung-bak, talked about his presidential aspiration, saying he wants to be king this time by running in the presidential election in December.

“In the upcoming presidential election, I have no intention to be the kingmaker,” the 67-year-old political heavyweight said.

In 2007, Lee led Lee Myung-bak’s campaign and facilitated his victory in both the Grand National Party primary against Park Geun-hye and the presidential victory against liberal contender Chung Dong-young. The process earned him the nickname of “kingmaker.”

It was the first time Lee spoke of his presidential ambition to the media.

Lee challenged recent media reports that he would once again play the role of kingmaker.

Shortly before Gyeonggi Governor Kim Moon-soo announced his decision to run for president Sunday, Lee met with him, Representative Chung Mong-joon and former Prime Minster Chung Un-chan, and the series of meetings were considered an attempt to create an alliance to challenge presidential frontrunner Park Geun-hye, who is the interim leader of the party considered responsible for its victory in this month’s general election.

Lee and Park are rivals within the ruling party. During the 2008 legislative election nomination process, Lee was behind a purge of pro-Park lawmakers, shrinking her political base. The move, however, backfired as he was criticized for creating an enduring, factionalist rift and failed to win the election in his own district.

Lee made a political comeback in 2010 by winning a by-election and serving as special political affairs minister, but in this month’s legislative elections, his associates were largely purged by the nomination committee created under Park’s emergency leadership. Lee himself was given a nomination and reelected in his Eunpyeong B District to serve for a fifth term.

“If I wanted to be a kingmaker to support another candidate, it would be correct to call me an invisible hand,” Lee told the JoongAng Ilbo. “But why would someone who wants to run in the presidential election set up a framework for another candidate?”

Lee said, “I met with like-minded people and exchanged views based on my decision to run in the presidential election.”

Asked about his political schedule, Lee said he would tour the country starting from today until May 8 to listen to the people’s opinions, meet with senior politicians and talk with local residents and university students.

Lee said his nationwide tour would proceed quietly. “I won’t make a big fuss,” he said.

Lee said he would announce his final position in time with the Saenuri Party’s convention on May 15. The ruling party will elect its new leadership at the convention.

Lee refrained from commenting on the ongoing debate between Park and other Saenuri presidential contenders over the rules for the primary. While some contenders have demanded an open primary, in which citizens can cast votes regardless of their party affiliations, Park, the party’s interim head, rejected the idea by saying, “Players should stick to the rules. It’s wrong to change the rules every time to accommodate the players.”

The current system is thought to favor Park, who enjoys support within the party.

Sources said Lee proposed to Kim during their meeting on Friday that the party adopt an open primary.