Stone Buddha collapses in the ninth

Stone Buddha collapses in the ninth 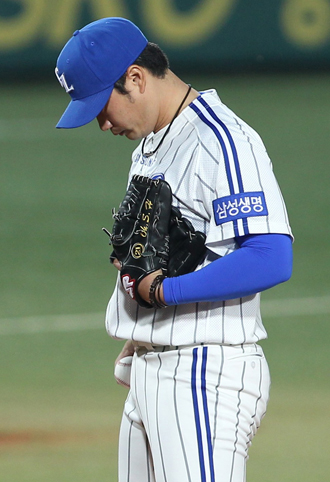 Samsung Lions closer Oh Seung-hwan reacts during the ninth inning of a KBO game against the Lotte Giants in Daegu on Tuesday. By Chung Si-chong

For Samsung Lions fans, closer Oh Seung-hwan jogging out to the mound signals another victory for the Daegu ball club. The right-hander amassed 47 seven saves with a 0.63 ERA in 57 innings last season, tying an Asian-league record that he set himself in 2006.

But on Tuesday night against the Lotte Giants, the unthinkable happened. Oh gave up six runs - two more than the entire number of runs allowed last year - and lost the game. It was a stunning result since he had collected 26 saves in his previous 35 games against the Giants.

“I think he gave up all the runs that he will allow for the rest of his career,” the Lions pitching coach Kim Tae-han said yesterday.

At Daegu Stadium, Oh took the mound in the top of the ninth inning to seal the team’s 2-0 lead. But six runs came off of one home run, four hits and two walks. The ERA of the four-time KBO save champion has now skyrocketed to 12.46. He was pulled with one out remaining.

It was Oh’s worst pitching performance since his professional debut in 2005.

Previously, Oh’s worst performance was on May 17, 2006, against the Doosan Bears, when he gave up five runs. In fact, Tuesday’s nightmare was the first time in 340 days that Oh has failed to collect a save when he took the mound and was also the first time in over two years that he became the losing pitcher.

Nicknamed the “Stone Buddha” for his emotionless face, Oh is known for his “hard-rock” fastball. On Tuesday, there were only four sliders in his 32 pitches and the maximum speed of his fastball marked 153 kilometers per hour (95 miles per hour).

While pundits agree that Oh’s arm was not bad on Tuesday, there were some problems with his control. When the two-time Korea Series MVP gave up a solo home run to Jeon Jun-woo, which is the first time in 340 days that he has given up a home run, his 148-kilometer-per-hour fastball was right down the middle.