Mixing old and new to prove seniors have a place in art, too

Mixing old and new to prove seniors have a place in art, too 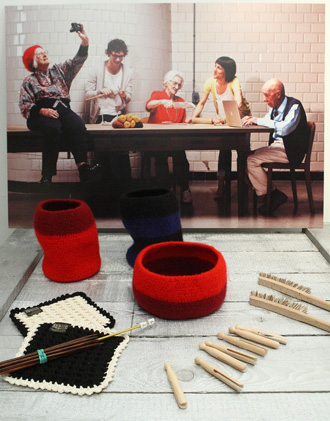 Two young Swiss designers decided to address the generational divide head-on, not only in displaying their works, but in how they are conceived from day one. As part of a design school diploma project, 25-year-old Benjamin Moser cofounded the Senior Design Factory that brought seniors into his studio as artists on the same level as those with professional training.

At the “factory” in Zurich, young and old come together to produce art that draws on each generation’s particular skills and interests. The young designers work together with seniors - the oldest being 92 - to create design projects that are later sold.

“The Senior Design Factory is to bring together old and young people as partners of equal value and to encourage communication between the generations through engagement in creative projects,” Moser told the Korea JoongAng Daily last week. “I wanted to do something to bridge the gap between the old and young as they are so apart from each other, which is not only a problem of Switzerland, but for nearly every country around the globe. I wanted to put them together and work together as colleagues.”

To launch the Senior Design Factory, Moser collaborated with friend and fellow student Demora Biffi at the Zurich University of the Arts in 2007. The two young artists both perceived a similar generational gap but also wanted to capture knowledge accumulated by seniors over their lives so that they could transfer it to younger people in some way through their art. 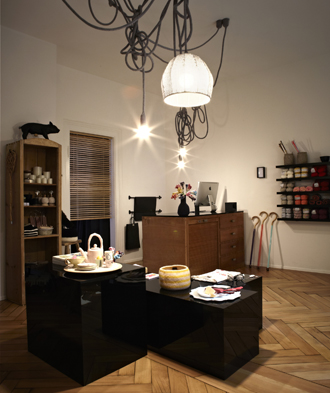 To do so, the two engaged a number of senior citizens to visit their atelier and contribute in whatever way they felt comfortable.

“The elderly people working with us are aged between 70 and 92. The oldest, who is 92, comes in once every one or two weeks to the atelier and knits,” Moser said. “Then the shop markets the products they have created.” The 92-year-old member, Elisa Ballekini, has been working with the Senior Design Factory for almost five years.

The young people who participate in the Senior Design Factory are mostly professional designers, Moser said, but the seniors are all everyday people who have been working in other careers their whole lives without any special artistic training.

“The Senior Design Factory is receiving a lot of attention in Switzerland because people like the whole concept and such collaboration between the young and the old,” he added. “It’s not just a concept, but something that is real.”

Moser said that Korean artists could also find inspiration in addressing generation issues instead of simply focusing on creating their own work. This is particularly important because there is large gap between young and old in Korean society, he said.

“Many young designers want to be famous and earn a lot of money. But I think the difference between them and this project is that our goal is not to earn a lot of money. We are a [nonprofit organization]. We don’t want to be rich, but only want something good for the society because that’s what makes people happy and that is better than earning much money,” Moser said.

To further develop the connection between senior participants and young designers, the project’s atelier isn’t just a place to create art. It also functions as a kind of shared living space for participants of all generations.

In addition to the shop, where the collaborative products are sold, there is a kitchen to prepare home-cooked meals and a workshop. These amenities further the transfer of knowledge beyond the artwork that is the main focus of the project, Moser explained.

“I want many designers who come to see our exhibition in Seoul to understand that this project requires a lot of heart and passion to understand old people and to really communicate with them rather than just ordering them to do something or make something.”

Indeed, it is the very fact that seniors create art without strict guidelines that makes it so valuable for some art enthusiasts.

“These are the perfect responses to the demand for a design for the common man,” a jury said about the Senior Design Project at “Design Prize Switzerland 2011,” where it won the market awards.

“A more important aspect in the eyes of the jury, however, is the exemplary way in which the project places a central emphasis on the social dimension of design.”

Seoulites can enjoy works created as part of the project until May 6 at the KT&G SangsangMadang in western Seoul. The Senior Design Factory was brought here as part of the Swiss Weeks, which were organized to celebrate the 50th anniversary of diplomatic relations between Korea and Switzerland. Events for the celebration fall under the themes of Swiss art and culture, design, sustainability and innovation.