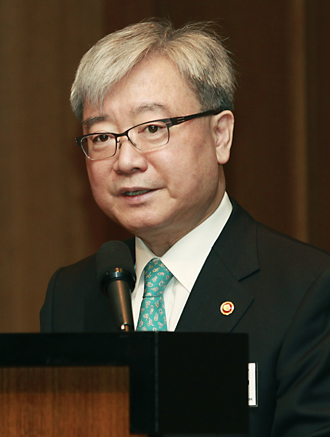 Korea’s top financial regulator said yesterday that foreign investors will not be discriminated against in the upcoming bidding for the government’s stake in Woori Finance Holdings, the nation’s largest financial company by assets.

Underscoring his optimism for what will be the third attempt to sell Woori after a failure to attract more than one bidder last August, Chairman of the Financial Services Commission Kim Seok-dong also underscored the need for transparency in financial products and government policies redressing societal polarization.

At the 2012 Korea Economic Forum hosted by the Korea JoongAng Daily at the Hotel Shilla yesterday, roughly 140 diplomats, CEOs, executives of financial companies and foreign businessmen heard Kim’s take on the hot issues of the day during a Q&A session following his keynote speech.

“During the sales process, both domestic and foreign investors will be treated equally under Korean law,” said Kim. “We will announce the start of bidding soon, and the bidding will be conducted as an international auction.”

Previous attempts to privatize Woori in Oct. 2010 and last year failed due to a lack of willing buyers. Last August there was a single bid from private equity fund MBK Partners, which the government did not accept because a lack of competition failed to “maximize recovery of public funds.”

The administration is trying to fulfill President Lee Myung-bak’s 2007 election pledge to recover state funds by privatizing state-owned companies. In the wake of the 1997 Asian financial crisis, some 12.8 trillion won in government bailouts was spent to save banks later consolidated into Woori Financial Group in 2001. Of that, only 5.4 trillion won has been recovered so far.

“The sale [of Woori] wasn’t successful last year because of global financial market conditions, but Woori Financial Group is doing very well this year and financial markets are better as of now,” Kim added. “I believe the time is ripe to recover public funds [sunk into Woori].”

After Kim’s remarks, a presentation by the organizing committee for Expo 2012 Yeosu Korea introduced the participants to the international festival that has been in the making for the past five years.

Being held for three months from May 12 to Aug. 12 and carrying the theme “The Living Ocean and Coast,” attractions, accommodations and transport arrangements for the upcoming expo in the South Jeolla coastal city were presented in detail by Lee Joon-hee, the commissioner of the International Exposition 2012, Yeosu.

In the first part of the program, the FSC’s Kim addressed the recent controversy over the return rate on variable annuity insurance policies, which allegedly lags behind inflation rates.

“I am also a variable annuity policyholder,” he said. “But with all financial products, a transparent system of customer notification from purchase to management is needed. [Regulators] will be preparing such a system soon.”

To a question asking about the economic repercussions of Korea’s rapidly aging society, Kim was emphatic in his concern.

“The population problem is the biggest enemy of the Korean economy,” he said. “Korea’s birth rate is one of the lowest among OECD countries. And I believe population policies are the most difficult set of policies a government can pursue, as it takes 30 years for a strongly-pushed population policy to see fruit.

“Besides bolstering manpower, Korea needs to continually expand its research and development investment from its current scale of fourth in the world [to] find in technology the potential for sustained economic growth.”

After a foreign diplomat asked about a sense of “angst” in Korea about its economy, that increasingly pits the have-nots against the haves, Kim noted that economic disparity was a global trend all governments are trying to deal with.

“Nowadays, polarization is exacerbated as economies grow,” said Kim. “Social unrest is being expressed about facets such as the disparity of large versus small companies, export versus domestic businesses, and full-time versus temporary workers.

“Polarization intensifies social conflict and threatens continuous, long-term economic growth, and the government must address it,” he said.

Kim himself is attempting to level the playing field with Konex, a new stock market for shares in small and medium-sized enterprises slated to open this year.

“We seek to design [the new market] so that social enterprises can enter Konex and gain new traction,” he said.