Demand picking up for houses despite slump

Demand picking up for houses despite slump 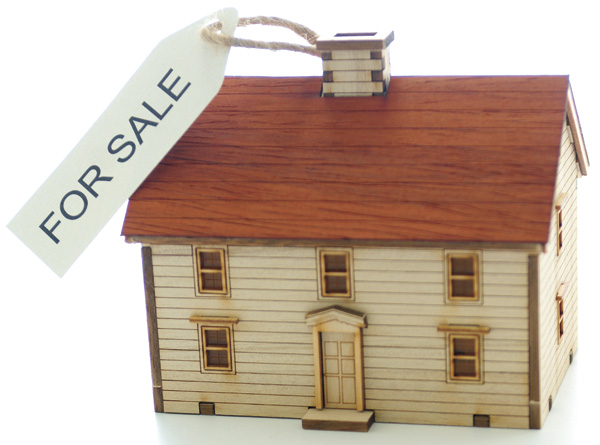 House prices in Seoul climbed 1.8 percent last year while apartments became 0.6 percent cheaper, according to Kookmin Bank, and the shifting dynamic in favor of larger and more spacious homes seems to be continuing this year.

In the first quarter, the former added 0.2 percent and the latter shed a further 0.5 percent. To a degree, the trend has begun feeding itself as more speculators jump in and snap up individual houses as investment options.

“Some people prefer living in a house because they can grow vegetables in their back garden,” said Park Jae-ryong, a fellow researcher at the Samsung Economic Research Institute (SERI). “They don’t need to worry about their neighbors complaining that they’re too noisy, and it’s much easier to have a pet.”

Investors planning to rent their property out tend to give it a modern reworking by adding multiple stories and gardens. Many target premises near public transport connections.

“Transport hubs in Seoul are now getting a lot of attention from people searching for homes,” said Jeon Young-jin of Yes House, a real estate company.

Competition is also heating up for houses nationwide, according to the Korean Land and Housing Corporation (LH). It recently released 128 plots in Yangsan, South Gyeongsang, but more than 18,000 people have already shown an interest in buying one and building their own house there, it said, creating a competition ratio of 1:128. 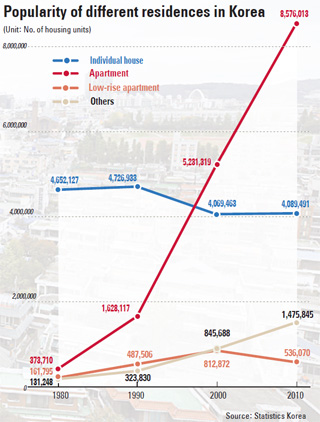 And this year, the company has sold all of its available plots for the construction of private residences in Cheonan, South Chungcheong, as well as 36 in Jeju Island.

“Cities that are either scheduled to host government offices or be developed soon are especially popular among buyers,” said Gang Gong-seok, president of Toomo, which offers consultations on land purchases.

The government’s move last May to relax the regulations governing the building of individual homes has also helped, even though many local districts are still in the process of applying the changes.

Moreover, experts warn investors to check the history of local land prices before making purchases due to the relatively high risk of purchasing overpriced plots.

“Many areas in Seoul have also seen radical prices [and so may be due for a correction],” said Lee Nam-su, a director at Shinhan Bank’s real estate division. 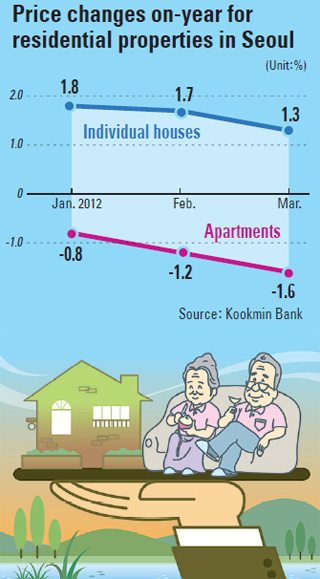 Seoul suffered from a serious housing shortage in the late 1960s. It plugged the gap by putting up rows of quick-to-assemble apartment blocks, according to researcher Park at SERI. This municipal planning decision born out of necessity helps explain the uniform look of the city’s skyline.

Within the last decade, the number of apartment units has overtaken the number of houses, but as people’s living standards and expectations continue to grow, the latter are slowly coming back in fashion.

However, Park says apartments are still a more practical choice for families with working mothers due to the services they offer.

“More apartment complexes are now building day care centers, adding both convenience and security for working mothers who worry about what to do with their kids during office hours,” said Park.

Parking is also more of a problem for house owners, he added.