Hyundai Heavy Industries has developed the world’s most efficient solar cell, taking a significant step ahead of others in a highly competitive market. 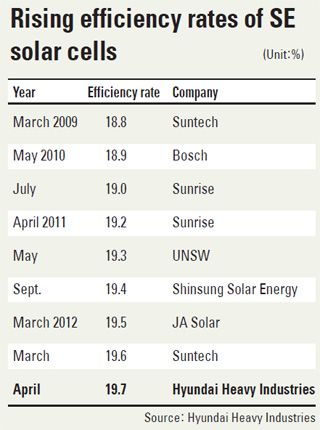 Among solar cells, the SE is the most efficient kind produced to date. It is a next-generation cell that can perform most efficiently at low costs.

The company said it won certification for the new cell’s efficiency from Fraunhofer-Gesellschaft, the largest organization for applied research in Europe.

In terms of efficiency, the new cell edges ahead of Chinese cell maker Suntech, which offers a rate of 19.6 percent. Until recently, Suntech has been No. 1 in the global solar cell market, followed by Japan’s Kyocera and Germany’s Schott Solar.

The newest solar cell by Hyundai is one inch bigger than Suntech’s five-inch cell, leading to a 57 percent increase in power production capacity to 4.7 watts per unit.

According to market researcher Solar & Energy, the global solar cell market is forecast to grow by 70 percent every year until at least 2015. Among others, SE solar cells are predicted to account for 50.7 percent of the market by that time, growing from 10.3 percent in 2010.

“Hyundai will enhance its R&D efforts to take the lead in future eco-friendly energy businesses,” said Lee Choong-dong, vice president of the company.

The Korean heavy industry giant recently established a research center focusing on green energy. It also plans to set up a comprehensive R&D center for photovoltaic energy in the second half of this year.

It currently runs the nation’s largest photovoltaic plant with an annual power capacity of 600 megawatts in Eumseong, North Chungcheong.