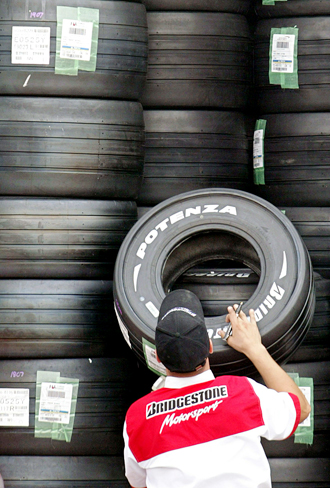 Imported tire sales are growing in line with increasing demand for replacement tires as owners of foreign vehicles tend to stick to the original brand.

They tend to opt for imports when replacing old tires despite the improved quality of domestic brands.

“As foreign car sales have grown, so has demand for imported tires,” said Song Jin-u, a manager at Bridgestone Tire Sales Korea.

“Those who drive luxury vehicles such as BMWs tend to replace the originals with identical [brand’s] tires.”

Michelin is the bestselling foreign tire brand in the country.

Bridgestone Tire Sales Korea, the No. 2 foreign tire brand here, has also seen its sales grow by double digits in the last few years, rising from 34.6 billion won to 47.9 billion won over the same three-year period.

Most of the imports are used for replacement purposes.

The popularity of foreign tires despite their hefty price tags seems largely due to a lack of public awareness of what else is on offer, which leads many drivers to rely on dealers’ recommendations or stick to what they have.

According to Michelin Korea, Primacy MXV4 225/55 R17-inch tires sell for $165 at the Tire Rack Web site but cost considerably more in Korea, selling for 219,200 won ($192) on Naver. They are also costlier than domestic tires of the same size.

The quality of domestic tires has improved considerably in recent years and they are used by many global automakers as original equipment tires, meaning they are installed in their new cars.

Kumho Tires, the runner-up in the country, will also supply its tires for the 3 Series later this year.

Nexen Tire, the smallest of the three tire manufacturers in the country, also signed a contract to supply to Fiat. This marks the first overseas original equipment contract for Nexen.

Nexen only produced replacement tires until a few years ago because these offer higher profit margins, but it is now expanding its lineup of original equipment tires.

“Short-term profits will be small in the next three to four years, but they will lead to higher sales in the future when replacements get added in,” said Lee Jae-yup, a spokesman for the carmaker.