Samsung Electronics posted a record-high operating profit of 5.85 trillion won ($5.15 billion) in the first quarter on the back of brisk sales of its Galaxy smartphones and home appliances. This was almost double its result posted a year earlier. 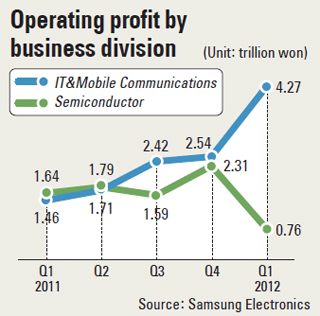 The company’s IT and mobile communications division, which produces handsets, laptops and cameras, racked up an operating profit of 4.27 trillion won for on-year growth of 193 percent. The division accounted for 70 percent of the company’s total operating profit for the quarter. 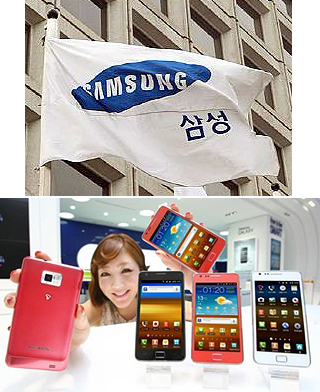 Samsung recovered its lead from Apple as the world’s biggest vendor of smartphones in the first quarter, market researcher Strategy Analytics said in an e-mailed statement yesterday. Samsung shipped 44.5 million smartphones in the first quarter, giving it 30.6 percent of the market, while Apple shipped 35.1 million units to claim 24.1 percent, it said. Nokia was third.

Samsung said in February that it plans to double sales of smartphones and tablet computers this year, helped by new products including its Galaxy S3, the highly-anticipated successor to the Galaxy S2.

However, operating profit from its semiconductor business in the quarter ended March 31 stood at 760 billion won, a more than 50 percent drop from one year earlier.

The closing price propelled Samsung’s market cap to 202 trillion won, surpassing 200-trillion-won mark for the first time in its history. The amount bests that of all other listed firms in Korea, and its market cap translates to around $180 billion. Although this is still just a third of Apple’s $566.6 billion, and two-thirds of Microsoft’s $270 billion as of Thursday (U.S. time), it has beaten rivals Nokia ($13.8 billion) and Sony ($16.5 billion).

Some experts forecast the momentum will persist in coming years. Hwang Min-seong, an analyst with Samsung Securities, said recently that Samsung’s market cap will reach 300 trillion won in five years. “Samsung is an exemplary producer in terms of its hardware ecosystem,” he said.