Investors are confused by IFRS system

Investors are confused by IFRS system 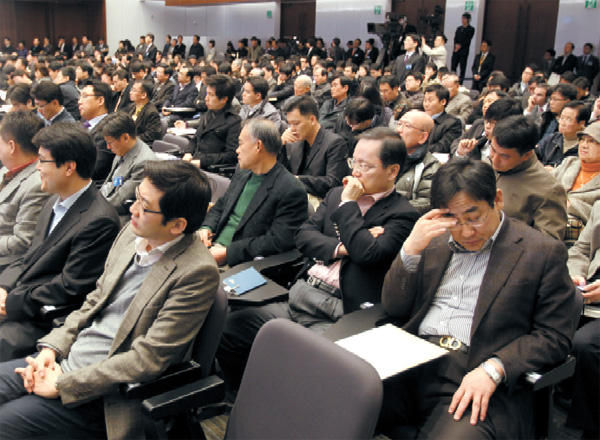 But the market barely responded. For two days after the announcement, shares in Samsung Card rose modestly. Since then, its price has continued to fall.

Samsung Card on Friday closed 2 percent lower than the previous trade at 36,450 won. 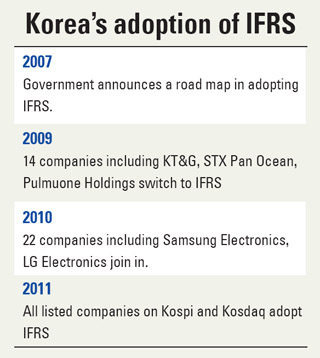 Tauras Investment and Securities even advised investors to sell Samsung Card shares, and projected that the share price would fall 16 percent.

The lukewarm response from the market was due to the new international financial reporting standards (IFRS) that were used in tabulating the credit card company’s performance.

The impressive expansion in operating profits didn’t have anything to do with operations.

It reflected the 437 billion won after-tax profit the company made in selling its stake in Everland, which was incorporated in its operating profit under the new IFRS system.

Major companies including Hyundai Motor, LG Electronics and Samsung Electronics have been releasing their first quarter performances under the newly adopted IFRS system.

There are mixed feelings about it. Some companies cheer as their operating profits reach all-time highs, like Samsung Electronics, while others shed tears as their numbers fail to reach their targets.

The idea was first proposed by the government in 2007, but now that it’s in place, investors are generally bewildered since they were used to the previous system, called K-GAPP, and they are struggling to make sense how well the companies have done in the first quarter.

Some companies on the verge of being delisted survived under the new standards, and others are accused of using IFRS to inflate their figures.

Analysts warn against possible misleading information by companies, whether intentional or not.

Sungshin Cement, a company that produces cement, in February announced that its operating profits turned from red to black last year although other cement companies still continued to struggle in deficits as the construction industry shows no signs of recovery.

The company’s operating profit of 7.5 billion won last year was largely contributed by the profit made from selling its plant in Bucheon, Gyeonggi.

Therefore, when excluding the profit from its plant sale and other profits that were not incorporated under the previous K-GAPP system, the company in fact saw a 43 billion won deficit.

Softforum, a security solutions company listed on the secondary Kosdaq, saw its operating profit surge more than 800 percent to 15.1 billion won in the first three months of the year.

However, this was due to a 13 billion won profit it made from selling land and buildings in southern Seoul.

Under the previous accounting standard, profits from selling tangible assets were not included in operating profits.

That made it easier for investors to evaluate whether a company’s actual business was doing well or not.

The IFRS allows companies to freely decide which profits are included in operating profit.

“Traditionally, operating profit has been an important figure for investors in evaluating a company’s value since it shows whether a company has the capability of generating sustainable, solid profit,” said a senior analyst at a brokerage firm.

“However, as the IFRS has no specific rules as to which categories are included in operating profits, there are some companies that should be delisted due to poor performances. But they manipulate the system so their books look great.”

The analysts warn that in particular, small retail investors could be vulnerable to the misguided performance reports.

According to FN Guide, a company offering information on the financial markets including research and reports, among 1,500 companies listed on the Kospi and Kosdaq that it studied, 30 that posted a surplus in operating profits under the IFRS system were found to have suffered losses under the K-GAPP system on their fiscal report for last year.

The government is expected to design guidelines for Korean companies by the end of this year.

During a visit to Seoul earlier this month, Hans Hoogervorst, chairman of the International Accounting Standards Board, which created and manages the IFRS system, said Korea needs to create its own detailed regulations for reporting operating profits and losses.