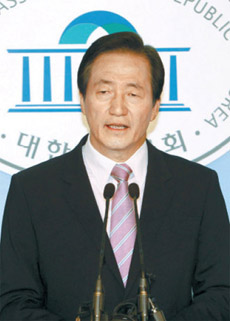 Chung Mong-joon, a senior leader of the Saenuri Party and one of the richest men in the country, announced his presidential bid yesterday, heating up the competition in the conservative ruling party’s primary for the December election.

“Today I am announcing my decision to run in the election to become the 18th president of the country,” Chung said yesterday at a press conference at the National Assembly. “I will write a new history for Korea with my experience in managing a company, working in the diplomatic field and uniting the country.”

The 60-year-old lawmaker, who was re-elected to a seventh term in the assembly earlier this month, said his main priority is political reform. 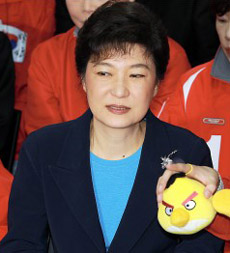 “Instead of reigning over the people, I will communicate with them,” Chung said. “I will end the vicious cycle of political power and corruption and eradicate regionalism.”

He also sharply criticized the conservatives’ presidential frontrunner, Representative Park Geun-hye, for depriving the ruling party of democracy. “She has hit a dilemma,” Chung said. “She has firm, sole control over the Saenuri Party. And the party now has no vitality. Democracy has gone missing from inside of the party.”

While Park is the clear frontrunner, Gyeonggi Governor Kim Moon-soo announced a presidential bid earlier this month. Representative Lee Jae-oh, a close associate of President Lee Myung-bak, also told the JoongAng Ilbo in an interview last week that he is interested in running.

At his press conference, Chung promised to revive the economy and root out factionalism from the party. “Did the Lee and Park factions truly reconcile?” Chung asked. “I think Park loyalists are largely oppressing and expelling Lee supporters.”

While speaking positively about the Lee administration’s overcoming of the global economic crisis and its response to North Korea’s provocations, Chung devoted a large amount of his press conference to criticizing Park for her political practices. Chung criticized her for sticking to current rules on how the primary should be run. He wants a totally open primary, where the candidate is chosen by popular vote among voters by ballot or electronic means.

“She quit the party and demanded an open primary,” Chung said yesterday, referring to Park’s temporary defection in 2002. “It is hard to understand why she rejects an open primary now. I expect her to give some serious consideration to the issue.”

Chung, however, said he will still stay with the Saenuri Party even if his demand for an open primary is not accepted. He also said he is open to working with other presidential contenders in the party as long as they share the same vision and values.

Chung entered politics in 1988 by winning an Assembly seat in Ulsan, the home of his company, as an independent. During his father’s presidential campaign in 1992, Chung joined his father’s party to support the bid, which he lost to Kim Young-sam.

In 2002, Chung announced his presidential ambition for the first time and founded his own political party. For his role as president of the Korea Football Association and the country’s hosting of the World Cup games that year, Chung enjoyed high popularity.