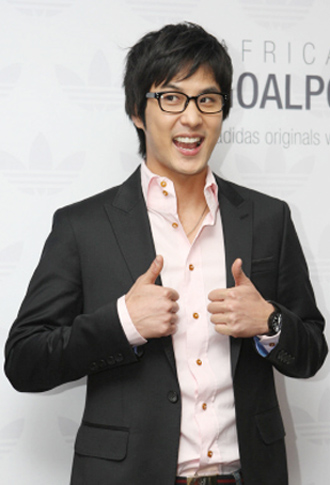 Actor Kim Ji-suk fulfilled a promise to his Japanese fans by holding a fan meeting entitled “Come Back” in Tokyo on April 30. The actor, who was discharged from military service in March, caught up with his Japanese fans after a two-year hiatus.

At the event, Kim entered onto the stage, saluted and yelled, “I’ve come here to fulfill my promise of holding a fan meeting upon being discharged!”
A video featuring Kim making his preparations for the event was also played before the actor showed-off his singing skills by performing his song “If I.”

As his birthday was on April 21, the star also shared some cake with fans and received a surprise gift.

In addition, he performed a song he penned just for the fans called “Thank You.”

“I’m such a lucky guy. To be able to spend my time with you all like this is such a blessing. Thank you all. I wouldn’t be here without all of you. Thank you!” said Kim.