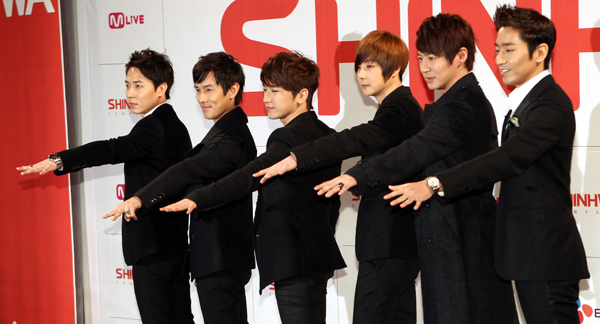 
Boy band Shinhwa, ever popular for its work in the 1990s, kicked off its Asian tour in Shanghai on Monday. The concert entitled “2012 Shinhwa Grand Tour - The Return” attracted a sold-out crowd at Shanghai Grand Stage.

The band sang a host of previous hits, including “Wild Eyes,” “Perfect Man,” “Brand New” and “T.O.P.” as well as new songs from album “The Return.” The highlight of the night was when band member Shin Hye-sung came to the stage. He had injured his knees after the band made its comeback in March and couldn’t dance for a month.

Those who weren’t lucky enough to snag one of the 8,000 tickets lined the streets outside of the venue to cheer on the band, bearing signs and gifts. And previously, when the band arrived in Shanghai for the performance, more than 1,000 people greeted them at Hongqiao International Airport, much like they did during the band’s last visit in 2007.

The next leg of the tour will take Shinhwa to Taiwan on May 12.