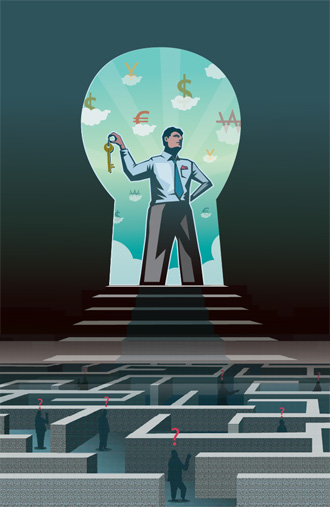 In Korea as in China, getting rich may be glorious, but this compulsion is now competing with a society-wide search for noblesse oblige and ways of sharing the spoils that are concentrated among the fortunate few.

As such, a small group of people from disparate backgrounds found themselves trading insights at a folksy Korean barbecue restaurant in Namyangju, Gyeonggi, last month, with the aim of developing a vision of wealth and wealthy individuals that satisfies both needs.

Among others, the party included a plastic surgeon based in the moneyed Cheongdam neighborhood of southern Seoul, a rough-around-the-edges head of a tofu-making social enterprise and the founder of a small burger franchise that began as a college campus food stand.

Although so different, they shared at least one thing in common: They are all members of the Korean Academy of Affluent Studies (KAAS), an association of academics, professionals and people of means striving to come up with answers.

“The academy seeks to define ‘being rich’ as not just being monetarily wealthy, but receiving society’s respect as well,” said Han Dong-chul, a professor of business administration at Seoul Women’s University and founder of KAAS.

Han is the pioneer of “affluent studies” in Korea, a nascent interdisciplinary field he became interested in after offering classes titled, “Marketing to the Affluent” in 1994.

Realizing that not many students gave much thought to what kind of a wealthy person they would like to be, Han resolved to underpin this basic desire with theoretical studies.

For example, the 10th and most recent book released by KAAS since it was founded in 2007 tackles the subject of “the rich in literature.” This sees eight co-authors delve into the depiction of the wealthy while also drawing on classic literature such as Thomas Mann’s “Buddenbrooks” and traditional Korean stories passed down orally.

In Korea, people’s desire to be rich became especially pronounced in the devastating aftermath of the 1997 Asian financial crisis. As major companies toppled and trusted banks were bailed out by the government, an unemployed population of 556,000 ballooned to 1.7 million by the end of 1998.

As Korea recovered, a 2003 ad campaign from a credit card company captured the newly-rooted dependence on personal wealth for security. Its catchphrase “Be rich!” went viral, popularizing it into an oft-heard greeting that is still used as a New Year’s blessing nearly a decade later.

Meanwhile, a best-seller list dominated by titles like “Rich Dad Poor Dad” at the turn of the century gave way to books like Michael Sandel’s “Justice: What’s the Right Thing to Do?,” whose Korean translation has sold 1.2 million copies since its publication in May 2010.

Meanwhile, this election year has intensified reproaches against the rich in the form of strong regulations and a stronger public backlash against big business, not to mention campaign pledges promising more taxes on the wealthy.

Han said KAAS seeks to bring people from both ends of the income spectrum together to pool their ideas on how to produce ventures that can be both profitable and respected by society.

The academy’s membership is nothing if not diverse, with more than 700 professors, CEOs and other professionals, philanthropists and ordinary Joes registered. Additionally, a support group of college students that goes by the name Protos meets regularly with entrepreneurs and other mentors to debate subjects related to wealth and the obligations it entails.

KAAS has worked to distance itself from criticisms that it is merely a platform for its founder and members to hobnob with the rich. The academy draws attention to its practice of giving awards to philanthropists, living or dead, who have made substantial financial donations or who have volunteered to help.

“Most societies that claim they want to help the poor are just made up of rich people,” Han said. “But there must be communication between the two and mentorship by those who have already walked the road we aspire to go down for wealth to be spread out [more fairly].”

KAAS sees its mission as a rare experiment in trying to erase the boundaries of various academic fields to codify as theory the nature of affluence. It is now attempting to go global as it advocates a “nonpolitical, nonreligious” redefinition of what it means to be truly rich.

“We’ve already had scholars from India and other nations express interest in working with us to map out the meaning of affluence in other countries,” said Han. “It’s our goal to propagate beyond our shores a beneficial way of wielding wealth.”